Sheriff: Armed Citizens Should Be Ready To Shoot, Stop Terrorists 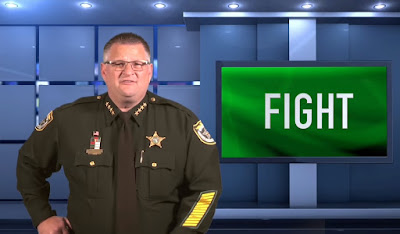 BREVARD COUNTY, Florida - Brevard County Sheriff Wayne Ivey appeared in a video that calls on armed citizens to be ready to take on terrorists in active-shooter scenarios and that terrorists should be targeted instead of politicians being politically correct.

The video has since gone viral with nearly 2 million views and has garnered nationwide attention from conservative media outlets such as The Blaze, Washington Times and Breitbart.

"As a sheriff, elected official, and citizen of our great country, I am personally disgusted by the senseless attacks and murders of good people by bad people with evil intent who have for too long been allowed to act in this manner," Ivey said in the video.

"Equally concerning is the fact that there are those in our country, who are in a position to speak out by voicing strength and taking action, who appear more concerned about being politically correct than they are about protecting those who took a Constitutional oath to serve."

"Let there be no mistake - This is not about politics, religion, ethnicity, race, or social status. But instead, is about our freedom, humanity, way of life, and the future of our great nation," continued Ivey. "It is time to stop reacting, and instead proactively engage anyone who threatens harm through terrorism or mass killings. It is time for our national and world leaders to stop worrying about being politically correct, and start worrying about what needs to be said and done to target - yes, I said target - terrorists."

"When did becoming politically correct become more important than punishing criminals and proud country? It didn't. And it's time for PC to become the acronym for protecting citizens which is  government's first, and only, priority to its people."

"It's time for America to get back to being America. Time for politicians and law enforcement leaders to stop being politically correct - and be bold, patriotic, and aggressive in protecting our country. And it's time to what needs to be said in order to do what needs to be done."

"So let there be no mistake in what I'm about to say:  The only thing that stops a bad guy with a gun is a good with a gun."

"If you're a person who is legally licensed to carry a firearm, now is the time more than ever to realize that you, and you alone, may very well be the first line of defense for you, your family, and others around you in a terrorist or active shooter-based scenario."

"I've always had absolute faith in our citizens to partner with us to help protect our community. And I want our citizens to always be alert and vigilant. However, let me be very clear in saying, this is much deeper. This is about being able to defend and survive an attack by armed, evil people until the Calvary can arrive."

"I'm in no way suggesting that we as citizens take on a vigilante role. What I am saying is that we need to be mentally and physically prepared to respond to an attack so we can effectively defend and protect ourselves in an emergency."