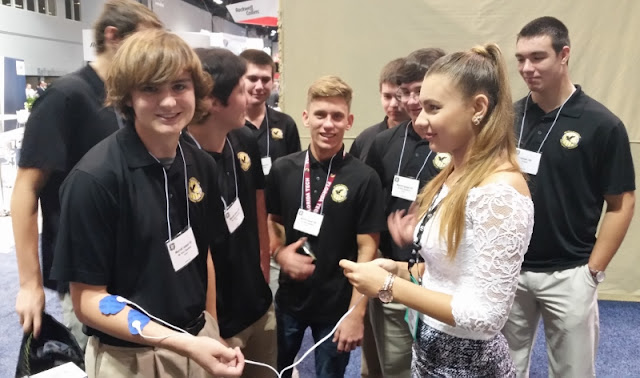 First, the academy received an $8,000 grant from the Lockheed Martin Corporation.  The funds will be used to support the purchase of supplies for the academy’s Project-Lead-the-Way engineering curriculum and to assist in funding several off-campus activities.

“We are very thankful to Lockheed Martin for this grant,” Parker said.  “Our curriculum is hands-on and supplies are the life blood of the program.  This money will really go a long way as we continue to provide our students with a quality program.”

Because of the grant, engineering students were able to attend the ITSEC conference in December in Orlando, Florida.  This is the country’s premier simulation and modeling conference, according to Parker.  Also, students will attend E-Week activities in February at the University of Florida, University of South Florida, and in Brevard County, Florida.

Second, da Vinci won a Northrop Grumman Foundation Team Grant to start a VEX Robotics team. In addition to Northrop Grumman, the grant is supported by the Harris Corporation, NASA, and the REC Foundation.  These grants will allow the academy’s Principles of Engineering class to build a robot in order to compete in regional competitions.

“We are excited to partner with these companies as we venture into VEX Robotics,” Parker said.  “This grant is a natural fit for our sophomore class curriculum and we look forward to competing against top schools in the state and nation.”

Third, three teams from the senior capstone Engineering Design and Development class have advanced to Round Two of the Conrad Challenge – a national competition headquartered at Kennedy Space Center, Florida.  Each team is tasked with solving a real-world problem and documenting its research, design, and prototype development, including incorporating Computer Aided Design drawings.

“I am very proud of our seniors and their projects,” Parker added.  “This is the first time we have entered this competition and to make it past the first round is incredible.  We have collaborated with students in south Florida who take the same class and it is exciting to see our students owning their research.”

Additionally, Parker was named the 2015 STEM Educator of the Year by the Space Coast STEM Council.  The Space Coast Women in Defense will host a banquet honoring Parker and other winners in January 2016.  Steve Portz, another da Vinci Academy faculty member, is a former winner of the award.

The da Vinci Academy of Aerospace Technology is a CHOICE academy at Merritt Island High School.  It is currently taking online applications from Brevard County students.  The deadline is February 5, 2016.

Students can apply by using the following link:
https://brevardflc.scriborder.com/inarea_career_academy