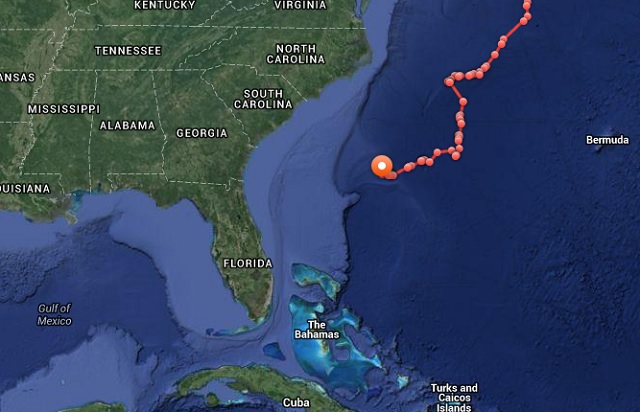 JACKSONVILLE, Florida - A great white shark weighing around 3,500 pounds that is tracked by satellite has been steadily making her way back towards the U.S. southeastern coast in February.

The 16-foot great white, named 'Mary Lee' by Ocearch researchers when she was tagged with a radio transponder off of Cape Cod in September 2012, had her latest ping locations recorded about 400 miles from the coasts of Florida and Georgia.

Mary Lee has been visiting Florida waters annually, according to Ocearch shark tracking data. Last summer, the great white swam off the coasts of Central Florida and North Florida. In 2014, Mary Lee traveled in the waters off North Florida, Georgia, and South Carolina.

The popular apex predator even has her own Twitter account with over 93,000 followers who keep up on the shark's whereabouts. To follow the Mary Lee's latest location, visit the Ocearch tracking map.

According to NOAA, female great white sharks are believed to mature when they are about 13-14 feet and can reach sizes up to about 21 feet in length.  Great white sharks can be found off the Atlantic coast of the United States from as far north as Newfoundland, Canada, to  as far south as the east coast of Florida - but rarely go into the Gulf of Mexico.

A 2014 study by NOAA Fisheries found that great white sharks are present primarily between Massachusetts and New Jersey during the summer, off Florida during winter, and have a broad distribution along the U.S. East Coast during spring and fall.

During winter, most white sharks are found off the northeast coast of Florida, the Florida Keys, and sometimes in the Gulf of Mexico.

A record number of sharks were found during NOAA's 2015 coastal shark research survey along the U.S. East Coast. More than 2,800 sharks were captured and tagged - the most in the survey’s 29-year history. Three of the sharks tagged during that survey were great whites.