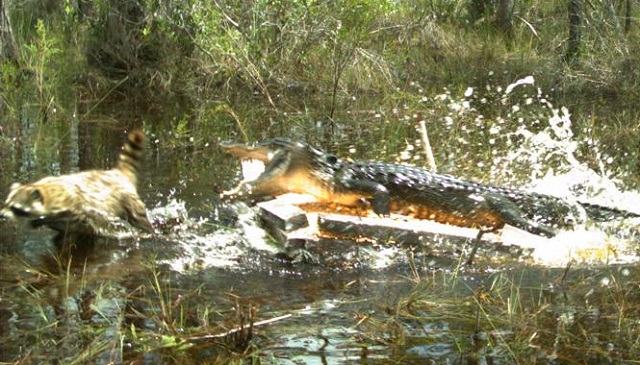 Scaring raccoons with large predators such as dogs is good for the food web an the entire ecosystem, a new study finds.

Wild animals that live without fear of predators are known to reproduce faster and expand their foraging area. So researchers decided to conduct a study with raccoons on the Gulf Islands in British Columbia where natural predators such as wolves, bears, and cougars had been eliminated due to human influences almost a century ago. Domesticated dogs are only animal those present-day raccoons recognize as a threat.

Those raccoons are devastating populations of crabs and fish in the islands' intertidal zone, and nesting songbirds on land.

To investigate whether the fear of becoming prey would slow down the pace of their foraging, scientists set up speakers along tracts of shoreline for a month at a time and intermittently played recordings of barking dogs.


Researchers say that the study points to something bigger. “Humans have done an excellent job of wiping out large carnivores across the globe and we’re only starting to understand what the ecological consequences of that are,” says Jason Suraci, a University of Victoria PhD candidate in biology. “One of the major consequences is that when you take away the large carnivores, you get outbreaks of the species that they eat—herbivores like deer and smaller predators like raccoons. So, understanding the ways in which these large carnivores historically kept their prey in check was very important to restoring these ecosystems.”

“What we’ve shown is that we have to consider the behavioural interactions top predators have with their prey and not just the actual predation—the killing and consumption—when we’re thinking about how to restore ecosystems from which large carnivores have been lost,” says Suraci.