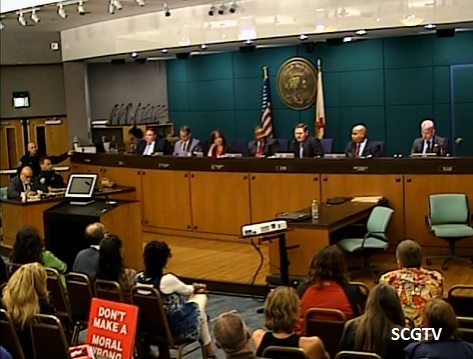 PALM BAY, Florida - A proposed ordinance to provide transgender people with rights against discrimination was soundly defeated by a vote of 4-1 at the Palm Bay City Council meeting on Friday morning. Councilwoman Michele Paccione was the only council member to vote in favor of the ordinance.

The meeting, which lasted over 6 hours, did not end until 1:30 a.m. on Friday morning after heated discussion from both sides of the issue.

"Government tries to create a solution in search of a problem," said Councilman Tres Holton who noted that not a single speaker presented evidence that transgender discrimination was rampant in Palm Bay.

Palm Bay Mayor William Capote said that he didn't feel comfortable moving on the ordinance because he didn't have time to review the 25-page ordinance. Capote emphasized that, despite's ordinance's defeat, Palm Bay is not a hateful place.

Councilman Jeff Bailey noted the strong showing of Palm Bay citizens who opposed the ordinance. Paccione countered Bailey's point by saying that many supporters of the ordinance were afraid to appear on camera and talk to reporters.