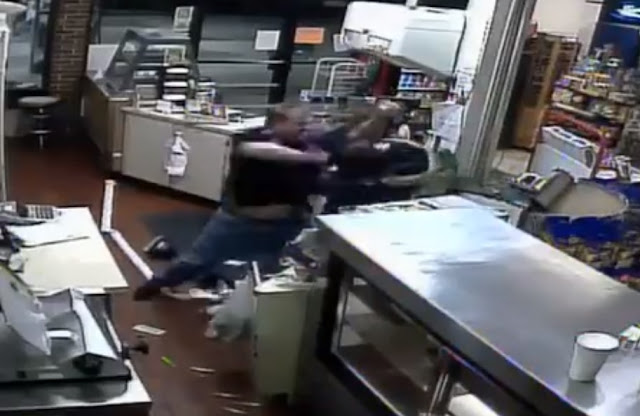 MIMS, Florida - Things didn't go as planned for a man who attempted an armed robbery at a convenience store last Tuesday night in north Brevard County, Florida. That's because the store clerk, who is also an Iraqi war veteran, disarmed the robber and punched him several times in the face before the robber fled.

Around 11 p.m. on January 26, an armed robber entered the Sugar Creek Gas Station located at 4353 Highway 46 in Mims, Florida. Video surveillance inside the store shows the suspect approaching the clerk and brandishing a firearm while demanding money. The suspect handed the clerk a plastic bag to place the money in, at which time a struggle ensued for the weapon.

The clerk, a U.S. military veteran who did multiple tours in Iraq, saw a chance to disarm the suspect and grappled the robber's hand holding the firearm. After a short struggle where the robber received several blows to the face, the suspect then fled the store.

After fleeing the store, the suspect got into the passenger side of a maroon, older model, large style four door car, similar to a Lincoln Town Car, with a white top and an unknown tag.

The suspect is described as a white male, approximately 19-22 years old, 5’8” tall, and a medium build. He was last seen wearing blue jeans, a blue jacket with fur lined hood, and purple latex gloves. Also, the suspect was wearing a Chicago White Sox baseball hat, which was left at the scene, and white bandana which covered his nose and mouth.

"Although I never encourage our citizens to actively engage criminals over money or personal possessions, I bet this criminal thinks twice before taking on a U.S. Veteran again," said Brevard County Sheriff Wayne Ivey.

The weapon was later determined to be a black and brown replica revolver-style air-soft gun.

Anyone with information about this incident or the identity of the suspect, is asked to please contact Agent Jon Amick of the Brevard County Sheriff’s Office North Precinct General Crimes Unit at 321-264-5210, or CRIMELINE at 1-800-423-TIPS (8477), or you can also visit http://crimeline.org/, or text ‘crimeline’ plus your tip to CRIME (274637). All information to CRIMELINE is confidential and you may be eligible for a reward.