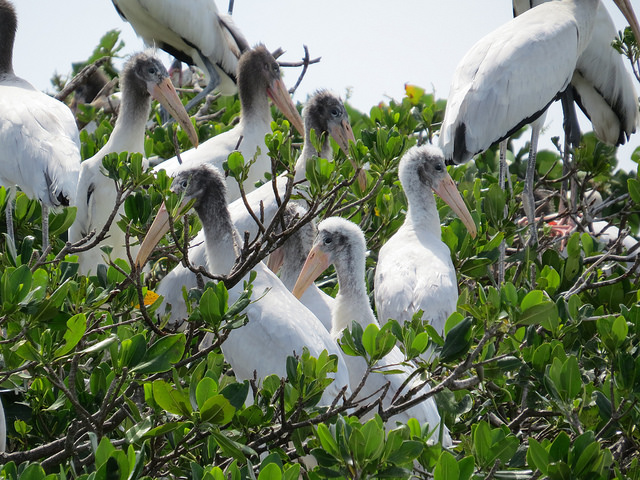 Birds in the Florida Everglades use alligators as bodyguards but also sacrifice their young as alligator food for this protection, according to a new study by researchers at the University of Florida.

Researchers suggest that there appears to be a beneficial interaction between the alligators and nesting birds, where birds nest above alligators for protection from mammalian predators, but chicks that fall from the nest may also provide a food source for the alligators.


For many bird species, nest predation is the greatest threat to raising chicks. Long-legged wading birds, like herons, egrets, ibises, storks, and spoonbills may choose nesting sites above resident American alligators, likely to take advantage of protection from nest predators such as raccoons and opossums.

While the benefits to the bird species of having alligators nearby are well-documented, few studies have explored the effect on the protector, the alligator. Specifically, some previous research has shown that wading bird nesting colonies could provide substantial food for alligators in the form of dropped chicks, which are chicks ejected from the nest when a bird lays more eggs than they can raise.

In their study, researchers compared the body condition of  around 40 female alligators living with and without long-legged wading bird nesting colonies in similar habitat in the Everglades, Florida. To measure body condition, they took blood samples and measured the mass and length of the alligators.

The researchers discovered that alligators found near wading bird nesting colonies were bigger than those in similar habitat without active colonies, independent of a range of environmental variables.

The authors caution that further studies are needed to analyze a wide variety of alligators living in a different habitats, but since nesting birds and crocodilians co-occur in many tropical and subtropical wetlands, the results highlight a potentially widespread beneficial interaction between two ecologically important species groups.

"Our study is the first to demonstrate a mutually beneficial relationship between nesting birds and a crocodilian: nesting wading birds provide nutrition for alligators that, by their mere presence, create predator-free space for birds, said Dr. Lucas Nell. "Crocodilians and nesting birds co-occur throughout the tropics, so these may be globally important ecological associations."

The entire study was published on March 2, 2016 in the open-access journal PLOS ONE.
Photo credit: Florida Fish and Wildlife Commision
Labels: Alligator Science