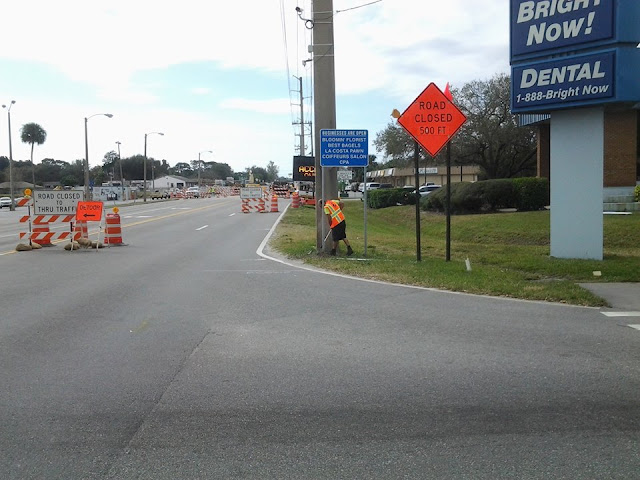 BREVARD COUNTY, Fla. -- Businesses on Wickham Road, between Aurora Road and Eau Gallie Boulevard, remain “Open For Business,” even in the midst of a major upgrade to the stormwater system that will help alleviate flooding to homes and businesses in the area for years to come.

On Wednesday, Brevard County Public Works installed signs indicating “Businesses Are Open” at the project site, on the north and south ends of the construction areas on Wickham Road. The signs are to assist traffic to businesses most affected by the construction project, said Public Works Director John Denninghoff.

The stormwater project, slated for completion April 2, involves seven separate drainage improvement upgrades, the largest involving installation of a concrete box culvert under Wickham Road just south of Aurora Road and adjacent to two existing box culverts. The project, which is grant funded, will cost an estimated $800,000 and is designed to protect flood-prone homes, especially those in the Kingsmill and Longwood subdivisions, and other homes and businesses along the Palomino Road and Aurora Road area. An estimated 230 structures in the area suffered significant flood damage during Tropical Storm Fay in 2008. As many as 400 structures in all suffered some form of flooding in that same storm event.

Denninghoff said Wednesday the contractor remains on schedule for the project, which is expected to be open nearly two months before the beginning of the 2016 hurricane season. June 1 through Nov. 30 is traditionally known as Brevard County’s wet season.

While there are currently two 8-foot by 5-foot box culverts under Wickham Road at the Eau Gallie River, the project will construct an additional 110-foot long 8-foot-by-5-foot culvert under Wickham Road to increase the capacity of the drainage system, thus reducing frequency and duration of flooding events.

“We continue to seek and push for every opportunity to shorten the schedule and restore traffic flow on Wickham Road at the earliest reasonable date,” Denninghoff said.

The project is among several in the area, some that have already been completed in the southern end, or downstream areas, of the corridor. Once the current project between Aurora Road and Eau Gallie Boulevard concludes, flood mitigation work will focus on the northern, upstream areas.
Labels: Melbourne