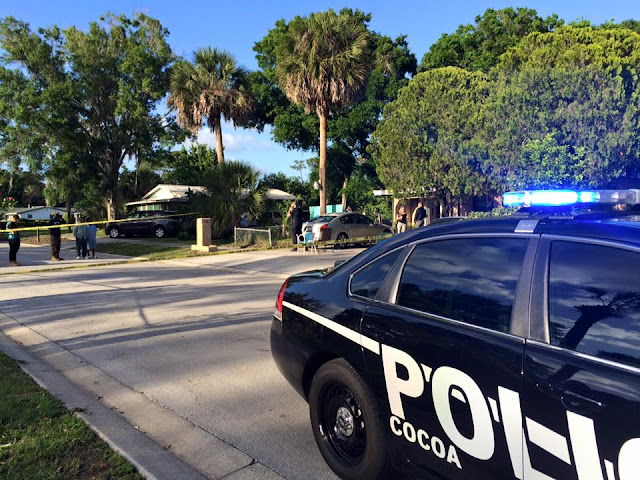 COCOA, Florida - Detectives with the Cocoa Police Department's Criminal Investigations Division have released the identities of the victim and suspect involved in Monday’s murder-suicide. The husband is identified as Adrian Lamar Hudson, 37. He was shot multiple times and was found deceased in his mother’s home on South Georgia Avenue where he also lived. The wife is identified as Aurora Marie Hudson, 35. She was found deceased from a self-inflicted gunshot wound.

On Monday at 5:17 p.m., patrol officers responded to the 700-block of South Georgia Avenue after receiving several 9-1-1 calls reporting a shooting. When officers arrived they found Mr. Hudson inside the home with multiple gunshot wounds. He was pronounced deceased on scene.

The investigation revealed that Ms. Hudson went to the home on South Georgia Avenue in Cocoa with her two daughters, ages 7 and 10. According to witnesses, she argued with her estranged husband and shot him several times. Witnesses told investigators that one of the children said that Hudson put the gun to the child’s head. The two girls ran across the street to a neighbor’s home for help. Ms. Hudson confronted the neighbor and demand that she surrender the children. The neighbor refused - and Hudson fled in her vehicle.

Hudson then went to Rockledge High School to pick up her oldest son. A short time later, Officer George Menendez saw the suspect vehicle in the area of Washington Avenue and Pomolo Street and initiated a pursuit through Historic Cocoa Village where Hudson dropped her son off. “She was in tears telling her son what she had done,” said Detective Branda Marchica. “She dropped him off and told him she was not going to prison.”

Officer Menendez witnessed the son exit the vehicle where Hudson then sped off. The officer initiated an attempt to stop the vehicle which continued to flee with the officer in pursuit. Hudson continued a route that ended at Lee Wenner Park at the northern river bank. As Officer Menendez attempted to get Hudson to exit the vehicle, he heard a gunshot. The vehicle then began to roll into the water. Cocoa Police with assistance from Brevard County Sheriff’s deputies pulled the woman out of the vehicle but later determined that she was deceased due to a self-inflicted gunshot wound to the head.

There was no documented history of domestic violence between the couple. However, detectives learned there were unreported physical and verbal disputes between the couple since they had separated. According to witnesses, Ms. Hudson was attempting to reconcile the marriage.