KENNEDY SPACE CENTER, Florida - The public has until 5 p.m. May 2, 2016 to submit comments about how future operations at Kennedy Space Center may impact the local environment, including impacts to the Indian River Lagoon. Public comments can be emailed to: [email protected] 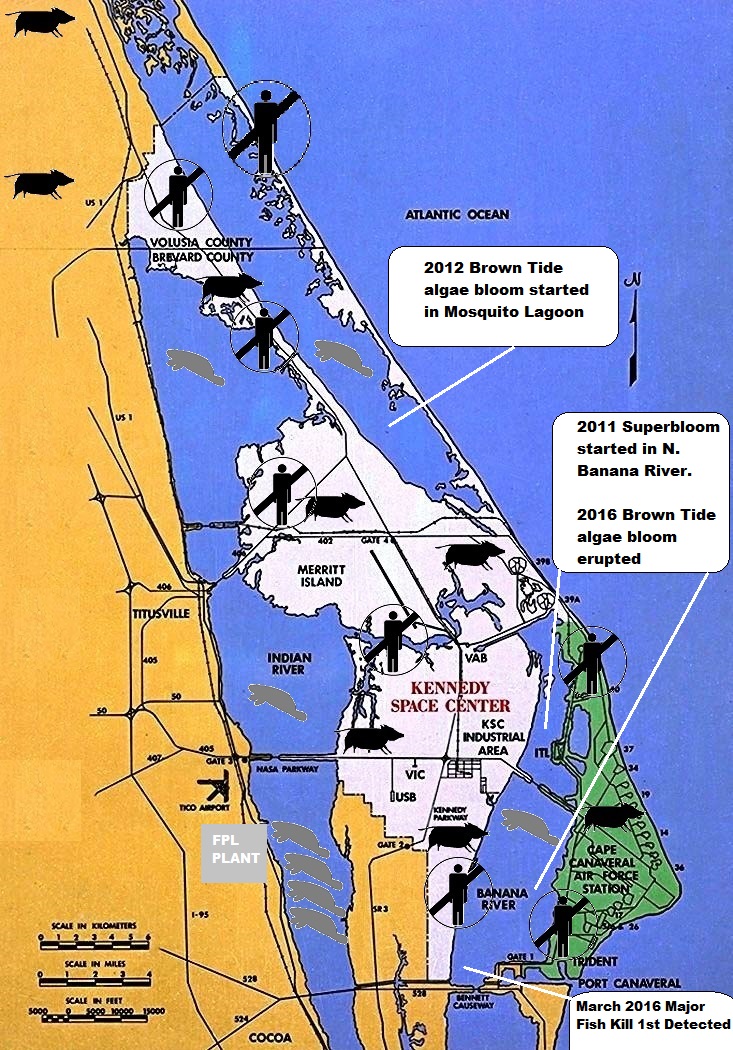 
In 2011, an algae superbloom erupted in the northernmost portion of the Banana River that is bordered by Kennedy Space Center and Cape Canaveral Air Force Station.  According to the St. John's River Water Management Districts investigation that followed, the superbloom then spread westward through the Barge Canal into the northern portion of the Indian River Lagoon near Cocoa. Eventually, this superbloom expanded northward through Haulover Canal and into southern Mosquito Lagoon to cover 132,500 acres.

In August 2012, a brown tide bloom began in the Mosquito Lagoon on the northern side of Kennedy Space Center and moved into the northern Indian River Lagoon near Titusville. The same brown tide reappeared in 2013.

In January 2016, a brown tide bloom reappeared in the northernmost portion of the Banana River that is bordered by Kennedy Space Center and Cape Canaveral Air Force Station.

In March 2016, the biggest fish kill in the Indian River Lagoon's history was first detected in the Banana River north of State Road 528 near KSC's southeastern boundary.

The geographic locations of the algal blooms appear to contradict the most-often cited hypothesis that sewage, grass clippings, pet waste, and fertilizer from the surrounding civilian residents were the cause of the recent algae blooms.

That's because the restricted federal lands of the Kennedy Space Center, Cape Canaveral Air Force Station, Canaveral National Seashore, and the Merritt Island National Wildlife Refuge make up most of those areas' surrounding landmass. The inhabitants consist mostly of wildlife with feral hogs being an invasive species.

"Before NASA took control of the property that is now KSC, the area was home to many people who had livestock and/or citrus groves. As the people relocated to surrounding towns, their domestic hogs (Sus scrofa) were occasionally left behind," the KSC Environment Impact study notes. "The mild central Florida winters and abundance of food resources made it possible for feral hog populations to explode." There are no efforts currently underway to remove the feral hog population from KSC. Waste from domestic hogs has been determined as the cause of algal blooms in other parts of the U.S.

Additionally, a manatee population remains in the waters surrounding KSC on a year-round basis because the warm water discharge by the nearby Florida Power & Light power plant has disrupted their natural winter migration pattern. The power plant was built during the Apollo Era at that location to provide power for KSC's operations and the neighborhoods nearby where the space workers lived.

The manatee population has since exploded in the years leading up to the recent algae blooms, leading many to believe that the sea cows' heavy seagrass consumption and resulting excrement contributed to the algae blooms. The Florida Department of Environmental Protection estimates that manatees contribute 25 to 109 tons (1.7% to 6.7% of the total) nitrogen and 2 to 7 tons (0.7% to 3.0% of the total) phosphorous entering the Indian River Lagoon system.


The Impact Of KSC Pollution On The Indian River Lagoon

Pollution from launch operations at Kennedy Space Center and neighboring Cape Canaveral Air Force Station has been occurring since the late 1950's. According to NASA's 2016 draft environmental impact study for Kennedy Space Center, " ... the ecologically, recreationally, and commercially important Indian River Lagoon adjacent to KSC has been impaired by the cumulative impacts of all point and non-point sources of pollutant loadings that have grown enormously in magnitude over the last half century."

In more recent times, it was discovered that Space Shuttle launches release thousands of pounds of chemicals and metals into the air and onto the Merritt Island National Wildlife Refuge and Indian River Lagoon. Specifically, a spike in the levels of aluminum, iron, manganese, and zinc were detected after each shuttle launch - the same elements used in the fuel for the solid rocket boosters.

Although the Space Shuttle program ended in 2011, NASA's new Space Launch System will also use solid rocket boosters containing the same fuel type, but on a much larger scale. The SpaceX Falcon 9 and Falcon Heavy use highly refined kerosene known as RP-1 and liquid oxygen which burns much cleaner than solid rocket propellants.

Did Iron From Shuttle Launches Spark The 2011 Superbloom?

The 2011 Superbloom investigation headed by the St. Johnson River Management Water District couldn't find a direct cause for the algal bloom, but the investigation didn't look at whether iron or other chemicals from KSC sparked the 2011 algae bloom. Instead, researchers focused on finding sources of phosporous and nitrogen leading up to the superbloom.

The investigation also specifically excluded sampling areas near KSC and CCAF which was ground zero for all three major algal blooms in Brevard County, Florida.

The Superbloom investigation disclosed the missing data and how it could have affected the investigation's findings: "... it likely underestimates the total area covered by muck in the superbloom region because the northern, restricted segments [of the Banana River] (BR1-2) and the extremely shallow BR6 segment were not surveyed."

Additionally, the long laundry list of chemicals and metals produced by legacy pollution from half-a-century of rocket launches could also influence the food web of microorganisms in the Indian River Lagoon, causing some species to grow while inhibiting the growth of other species. However, that cause was not examined during the 2011 Superbloom investigation.
Labels: Indian River Lagoon