Florida Man Arrested For Saying 'Penis' At School Board Meeting 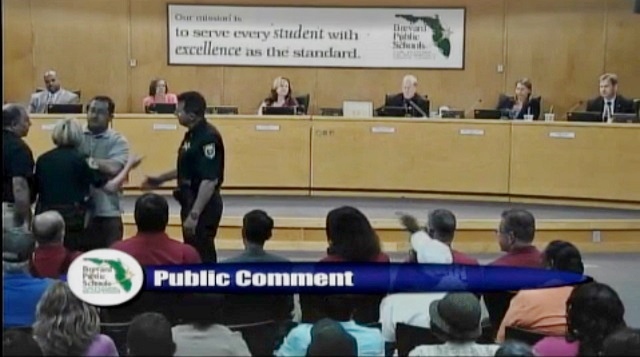 The controversial agenda item that drew a large audience and heated debate was a proposal to schedule a hearing in July on implementing a non-discrimination policy for transgender students.

Before the public speakers began, Ziegler laid down some ground rules on civility.

"The reason why I am here now is that we are not putting children's safety first," Paterakis said during his public speaking time. "When you say what we need to use language that is appropriate in what we do in our schools should be what we have here. Would it be O.K. now if I showed a picture of my penis to you guys? Because that's what happened..."

"We have a teacher who put his phone onto the big screen and showed, what the students say, was his erect penis," Paterakis continued, referring to a 2014 incident where a BPS teacher was only suspended for 10 days for showing students a picture of his penis.

"What? Are you kidding me?" Paterakis asked Ziegler.

LISTEN TO A DISCUSSION OF THIS STORY ON BILL MICK LIVE

A school security officer then approached Paterakis at the speaking podium and pushed down the microphone with one hand while grabbing Paterakis' shoulder with the other hand.

Paterakis turned to Ziegler and said, "I have a right to three minutes of free speech."

"No, Dean. I asked you to be civil," Ziegler replied as two Brevard County Sheriff's deputies closed in on Paterakis.

Shouts of support for Paterakis came from the audience with the chant, "Let him speak."

Paterakis then dropped to the floor and crossed his legs and arms - a common form of civil disobedience used by protesters in the 1960's when confronted by police.

Four additional deputies poured into the School Board meeting from various entrances and four of the six total deputies carried Paterakis out of the meeting with his arms and legs still crossed.

As Paterakis was removed, Ziegler turned his attention to the audience.

"I think it was a fair request to ask him to be civil," Ziegler said to the crowd that was still chanting "Let him speak."

"We will not allow slanderous, abusive, or profane speech in the meeting," said Ziegler over the cries from the audience.

"We can clear the room right now," Ziegler threatened.

An audience member shouted back, "This is a public meeting!"

"Oh it's public, you don't have to be in attendance," Ziegler responded.

Paterakis was charged with disturbing a school function and resisting arrest without violence. He was booked into the Brevard County Jail and released on $750 bond.

In 2014, Dean Paterakis caught Andy Ziegler stealing campaign signs. Although the police discovered campaign signs in Ziegler's trunk that did not belong to him, he was not arrested.