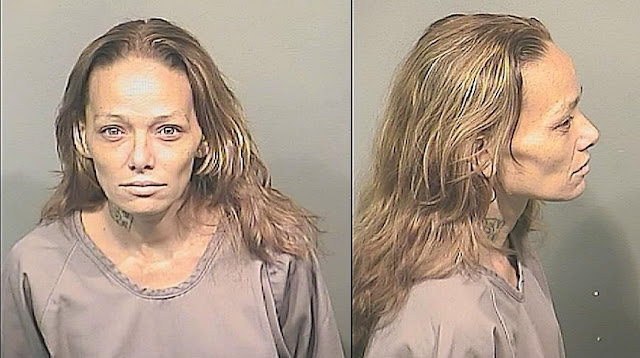 WEST MELBOURNE, Florida - West Melbourne Police are still searching for a woman who abandoned a baby during a traffic stop on Thursday.

Around 10 a.m. on June 9, 2016, a West Melbourne police officer ran the license plate on a red Dodge Caravan and discovered that the female registered owner had a suspended driver license.

During the traffic stop, the driver parked the vehicle in a Publix parking space located at 2261 West New Haven Avenue. The officer then verified that it was in fact the registered owner, Mandy Logsdon, behind the wheel. The officer approached Logsdon and engaged her in conversation relating to the status of her driver license.

Police say that when the officer began writing a traffic citation, Logsdon fled on foot, running behind a local business and scaling the perimeter fence. The officer who made the traffic stop, Sandra Jenkins, did not give chase because a four-month-old baby‬ boy was in the back seat of the vehicle.

While other assisting officers searched the immediate area for Logsdon, Jenkins stayed with the infant. Police were unable to locate Logsdon and believe that she was picked up in the area.

The West Melbourne Police Department announced on Friday that there is probable cause for Logsdon’s arrest with the charges of driving while license suspended, resisting arrest without violence, and contributing to the delinquency of a minor.

On Thursday, police had announced one of the possible charges as felony child neglect. But after consulting with the State Attorney's Office, they were unable to pursue that charge because an officer remained with the child to ensured his safety.

“Although we have received several tips, we have not located Logsdon. We continue to actively search for her and encourage her to turn herself in to answer for her actions,” said West Melbourne Police Captain Richard Cordeau. “Letting an offender flee without making an attempt to stop them generally goes against what we do as law enforcement officers. However, in this case, we are proud of Officer Jenkins’ actions in ensuring the safety of #babyjenkins.”