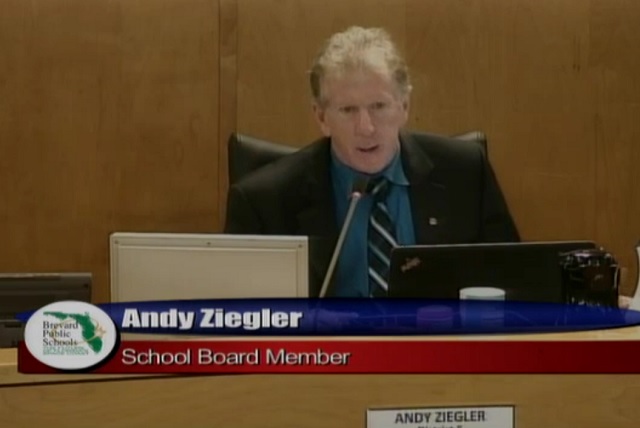 BREVARD COUNTY, Florida - Brevard County School Board Chairman Andy Ziegler took the opportunity at Tuesday's School Board meeting to defend his disruption of Dean Paterakis' three minutes of public speaking time at a previous meeting last May that made national headlines.

The lengthy, prepared speeches of both Ziegler and Paterakis follow:

In light of previous events, I'm just going to make sure that there is an understand of public comment. It's been said in the past by a previous chair, that our meetings are not public meetings. By law, they are business meetings being held in the public in the sunshine.

It was even alluded to that we should hold our business portion of the meeting at another time so we can get right to public comment. That is not the purpose of the meeting. Although we are glad to hear input from our citizens of items of public concern relative to this organization. And of course, we will always continue to do that.

Up until about 2014, there was no law requiring that public comment even be part of our business meeting. We have always done that. I believe all the government agencies in the county have done that. I'm assuming that hasn't always been the case.

Although with that privilege of speaking come rules - parameters for speaking. In 2014, the Legislature, because apparently something happened somewhere, made a law that says that we must listen to speakers who want to speak to an agenda item. Which therefore means that that person needs to speak before something that we are going to vote on at that particular meeting.

Which is why sometimes we may re-arrange speakers, if we have an excessive number of speakers, so that we follow the law and allow that to happen.

Even though that new law is in place, the rules of speaking still apply to this meeting.

Our attorney, Harold Blistline, has done much research. As we know, this is a misunderstood portion of the meeting where people are not sure what the parameters are. It's been challenged in courts. Apparently numerous times. Mr. Blistline has given me some case law to recite. So maybe it will give some more clarity on public comment. These are from case law:

The public comment portion of the School Board meeting is a limited public forum for purpose of the First Amendment to the United States Constitution. As such, regulations on speech during public comment must be reasonable and viewpoint neutral - but that is all they need to be.

There is a significant governmental interest in conducting orderly, efficient meetings of public bodies and the presiding officer has the authority and discretion to regulate speech that is irrelevant, repetitious, or disrupts, disturbs, or otherwise impedes, the orderly conduct of the meeting. So long as the speaker is not stopped from speaking because the presiding officer disagrees with the viewpoint of the speaker.

As I have said before, I believe that we are all advocates of children here, which is why we are all here. And therefore, we should all be good role models because there are frequently children that are in the audience watching us or may even be watching the videos that we post online.

As I understand, the Boy Scouts even, have to watch a public meeting for a civics badge or something of that nature - a citizen's badge. And so, they frequently watch School Board meetings. Mr. Blistline, you commented to me that there was a ruling relevant to , I believe it was prayer, where the courts have ruled that we are an extension of the school for that aspect. Can you explain about that?

And we all agree with that. And I think we all acknowledge that is a concern at our meetings. So, I  we do believe in that.

While some may disagree with where I draw the line on speaking, most agree. Not everyone will agree with that decision. It doesn't matter where we draw the line. There will be people that disagree.

So, I ask that everyone be respectful of the rules with no profane, abusive, or slanderous speech. And please don't do anything to disrupt the meeting, and there will be no reason to cut off anybody at the microphone. I will, as I have before, give a warning. Whether you disagree or not, please heed the warning. And I hope that you will continue - at that point- respectfully to the attendees of the entire meeting and to the process of the meeting.

What concerns me about the Board, and its attempt to silence citizens, especially after the recent arrest of our Brevard County principal, which validates my concerns. According to the affidavit, there were 14 movies which depicted young boys between the ages of approximately 8 and 12 years of age engaging in sexual activities, and each other, and adult males.  There are more details, but are too graphic to share today.

Using medical words for male genitalia that we use in fifth and sixth grade sex education classroom is not a reason to violate my free speech because you find those were offensive. And slander is only slander if my statement is false and damaging.

So Amy Kneesy all the sudden wants to vet principal candidates as if she only just now found out that there are pedophiles in our schools. This behavior of the board - and it's old and worn-out response that 'we made mistakes, we will do better' is getting old with the citizens of Brevard. And I believe they are not going to fall for it any longer.

What concerns me is that the former School Board candidate, Denise Coyle, exposed these abuse issues and other grave issues three years ago. And although we were promised that things will be fixed, they haven't.  Employees with criminal records who are prohibited by law to work in Brevard Schools were working in our schools and no one was held accountable for hiring them.

There is another teacher, who Denise Coyle exposed, who was bullying and sexually harassing students. And when an eighteen-year employee, Louis Ruffalo, came to her and the students' aide, and asked to have a meeting with the senior staff. He was fired for bringing the subject up.

This teacher, James Wilkin, is now moved to another school. I understand he continues to work now with elementary students instead of high schoolers. And I ask Brevard County why?

Just like principal Ricky Sheppard, who I believe had enough and his personnel file to exclude him from working with young children, is moved to another school and is promoted. And I ask why?

But back to the reason I was arrested the first time the last time I spoke. I came to ask why a teacher, who even by the Superintendent's letter of reprimand writes, "Due to the egregious and repetitious nature of this issue, we are invoking article 18, section O."

What is repetitious mean? What has he done before? How come we don't know this? I encourage you, every student, to Google "Noisy Room" and "Brevard Schools" and read all of the cases that they have come up with. Let's not just vet principles, lets vet all employees of Brevard Schools. And let's start with the employees that keep getting moved from one school to the next. I think that is a good start.

That was probably one of your best speeches.

I wanted to also make a comment about something that was said.  And it has been said repetitively about possibly the conflict between myself and the previous speaker from last meeting. Just so you all know, that speaker was 27th on the list and I elevated him to 3rd on the list. If there was a concern or I wanted to use a conflict, he would have remained 27th on the list. So, I believe in taking the high road and professionalism outweighs personal opinion.