I-95 Near Viera Re-Opened After Fiery Fatal Crash 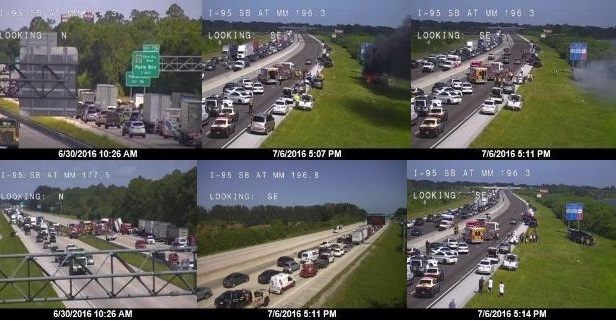 VIERA, Florida - All lanes have re-opened on I-95 following a fiery fatal crash that occurred around 5 p.m. on southbound I-95 near mile marker 195 by south Rockledge, Florida.

According to the Florida Highway Patrol, 54-year-old Maria Arteagade Durant of Miami Lakes, Florida was driving a 2015 Toyota van southbound on I-95 around 4:55 p.m. on Wednesday, July 6, 2016.

Meanwhile, 46-year-old Richard Abrams of Stroudsberg, Pennsylvania was driving a 2010 Chevy SUV that was pulling a trailer. For an unknown reason, the Toyota struck the rear of the trailer which caused both the trailer and the Chevy to overturn.

Just as the accident occurred, Brevard County Fire Rescue firefighters Dan White and Larissa Conroy were off duty and returning home from a class when they came upon the scene.

They found the Chevy jack-knifed with the Toyota on its driver side. The firefighters found 66-year-old Marlene Abrams of Mountain Top, Pennsylvania  pinned underneath the Chevy and in need of immediate assistance. With the help of bystanders, they rolled the Chevy back upright and dragged Marlene to safety.

They then focused on Richard who was still pinned in the Chevy. Conroy used the electric seat to move the seat back and then pulled Richard through the back door of the Chevy while White held back the flames with a portable fire extinguisher. The entire rescue was performed while the Chevy was burning.

Richard Abrams suffered serious injuries as a result of the crash and remains at Holmes Regional Medical Center in Melbourne, Florida. Marlene Abrams did not survive the crash and was transported to Viera Hospital. Durant did not suffer any injuries.

All parties were wearing seat belts at the time of the traffic accident and alcohol was ruled out as a factor by FHP.
Labels: Rockledge Viera