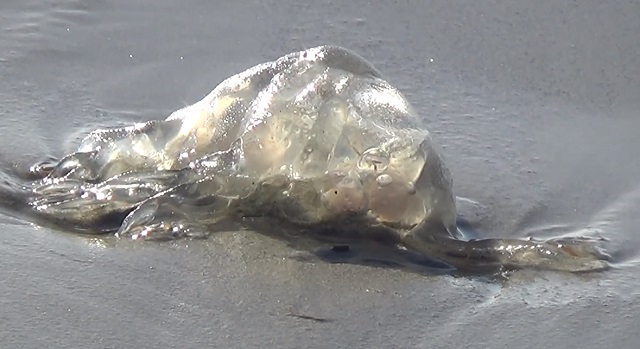 COCOA BEACH, Florida - A venomous and potentially deadly species of jellyfish are in the water and washing up onshore in Cocoa Beach, Florida during the last week of July 2016.

Although the Florida Fish and Wildlife Commission cannot be 100% certain without a physical sample, based on photos and video submitted by Brevard Times, FWC's best guess is that the species is a box jellyfish called Chiropsalmus quadrumanus.

"I've been stung by the Portuguese Man o' War – that's no picnic; that rips across your skin, you feel paralysis, you're very, very sick to your stomach, fever comes on immediately – but that's like child's play compared to that box jellyfish," Diana Nyad, the first person to swim for Florida to Cuba, told PEOPLE magazine in an interview.


FWC noted that its staff has previously collected this jellyfish species offshore of Brevard County, Florida. So it is not completely out of the ordinary for the box jellyfish to appear on Florida's Space Coast beaches. This particular species is distributed from Cape Hatteras, North Carolina through Florida.

Even though the Atlantic Ocean species of box jellyfish does not pack the extreme potency of the infamous Australian box jellyfish dubbed the sea wasp, the species that washes up on Florida's shores can still be life-threatening and has a painful sting.

Additionally, the box jellyfish's clear bell could be mistaken for other less-venomous jellyfish that commonly wash up along the Brevard County coastline. The box jellyfish can be identified by it's box-shaped bell. On each of its four corners, there are stout, hand-like structure where up to nine tentacles dangle.