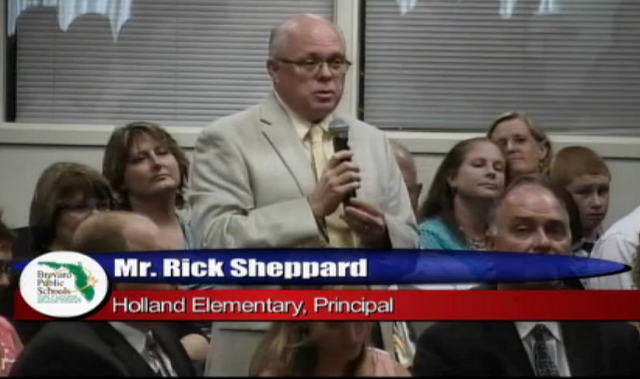 A Brevard County Public Schools principal who was charged with the possession of child pornography back in June is expected to plead guilty in the case.


59-year-old Rick "Ricky" Delano Sheppard of Melbourne, Florida appeared in federal court on Monday morning. According to documents filed in the U.S. District Court  in Orlando, Florida, Sheppard is expected to enter into a plea deal as early as next week. His trial had been scheduled to start on August 15.

Sheppard's arrest comes on the heels of allegations made by School Board candidate Dean Paterakis that the current School Board and administration are doing little to remove, and even promote, teachers with questionable sexually-related conduct around students.

During a May 2016 School Board meeting, Paterakis had attempted to bring up 2014 incident where a BPS teacher was only suspended for 10 days for showing students a picture of his penis but still remains employed by BPS.

At the urging of School Board member Amy Kneesy, School Board Chair Andy Ziegler disrupted Paterakis' three minutes of public speaking time about the teacher's inappropriate sexually-related conduct. A BPS security officer then grabbed Paterakis by the shoulder and arm without his consent while pushing down a microphone to intentionally disrupt Paterakis' allotted speaking time. Uniformed Brevard County Sheriff's deputies then removed Paterakis from the meeting and charged him with resisting arrests and disrupting a school function. The arrest made national headlines. Florida State Attorney, Phil Archer, ultimately dropped the charges against Paterakis.