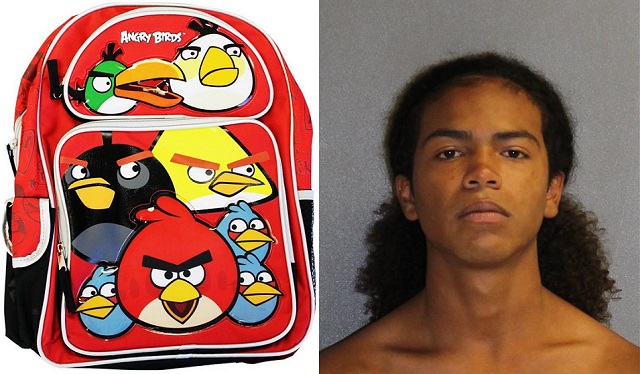 VOLUSIA COUNTY, Florida - An “Angry Birds” backpack spotted on a Florida man walking down a sidewalk early Tuesday morning was the break Volusia County sheriff’s investigators needed to make two arrests in the overnight armed robbery of a convenience store in Deltona, Florida.

The robbery, called in just before 4 a.m. at the Kangaroo Express at 2798 Elkcam Boulevard, was captured on video surveillance. A Kangaroo employee told deputies two men came through the front door, pointed guns at him and told him to follow their orders. One handed him a black backpack with a cartoon character on it and allegedly said: “You know what I want.”

The employee put cash, cigarettes and cigars into the bag, handed it back, and the suspects ran off with it. A woman parked outside the store also witnessed the robbery and gave deputies a similar account.

A review of the surveillance video gave deputies a detailed description of the suspects, including the distinct Angry Birds backpack. Deputies, K-9 units and the Sheriff’s Office Air One helicopter searched the area for suspects.

About a half-mile away from the robbery, in front of a Dollar Tree store at 2135 Howland Boulevard, a deputy noticed a man walking down the sidewalk carrying a backpack with a “Bomb Bird” from the “Angry Birds” cartoon embroidered on it. It appeared to match the bag in the video. The 18-year-old suspect, Luis Montanez, was also carrying a black handgun.

Deputies say that Montanez confessed to the robbery, and investigators also identified a second suspect, 18-year-old Devyn Omar Rivera, who was taken into custody later on Tuesday. Investigators also recovered the cash and cigarettes stolen from the store.