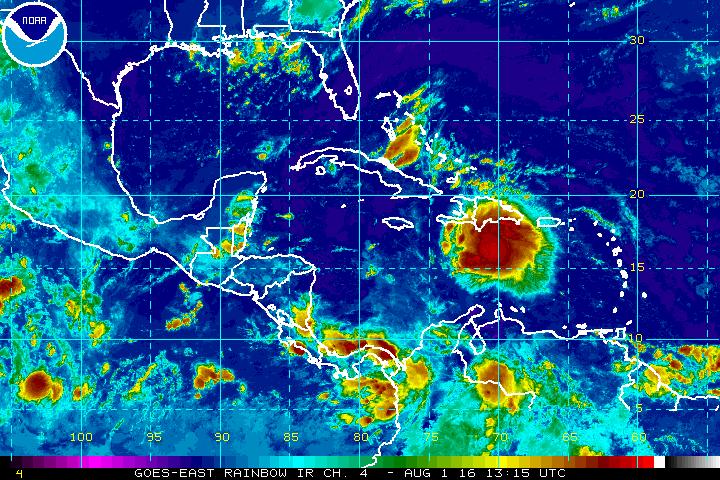 MIAMI, Florida -- NOAA's National Hurricane Center storm tracker in Miami, Florida has issued a Tropical Weather Outlook which predicts a high (80%) chance of a strong tropical wave becoming a tropical cyclone in the Caribbean on Monday or Tuesday.

The tropical wave is located over the central Caribbean Sea about 350 miles east-southeast of Kingston, Jamaica, and continues to show signs of organization.

Earlier satellite wind data indicate that the system is producing winds of 40 to 45 mph, and recent satellite and ship observations suggest that a circulation is gradually becoming better defined.  If this development trend continues, Tropical Storm Earl is likely to form later today or tonight as the
system moves westward over the west-central Caribbean sea at 20 to 25 mph.

NHC forecasters say that, regardless of development, locally heavy rainfall and gusty winds, perhaps to tropical storm force, are likely along the southern coast of the Dominican Republic and Haiti on Monday.

Tropical storm conditions are likely to occur over Jamaica by this afternoon or evening, and could reach the Cayman Islands overnight. Interests in these areas and elsewhere in the western Caribbean Sea should continue to monitor the progress of this disturbance.

Most spaghetti models forecast that this system, named Invest 97L, will move across the western Caribbean and make landfall on the Central America coastline somewhere between Nicaragua and the Yucatan Peninsula.