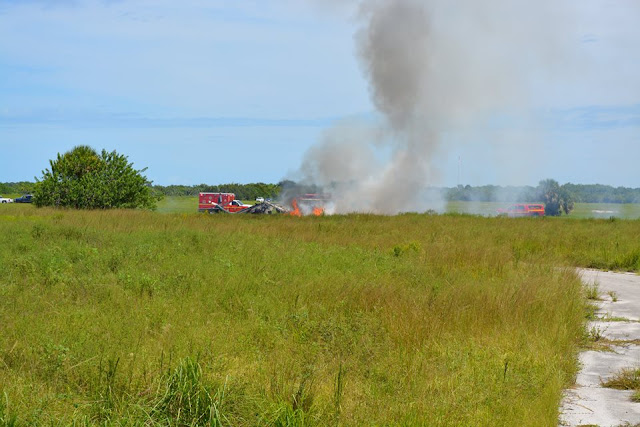 PALM BAY, Florida - The National Transportation Safety Board has released preliminary findings of the agency's investigation into to the crash of a helicopter that killed three people at 'The Compound' near Osmosis Dive in southwest Palm Bay, Florida, at approximately 1:40 p.m. on Tuesday, September 6, 2016.

The NTSB discovered that the Sikorsky S-61 helicopter's main and tailrotor blades exhibited signatures "consistent with low rotational energy" even though both engine fuel control units were found with their respective control shaft in the "FLIGHT" position.

According to the company that owned the aircraft, AAR Airlift Group, Inc., the helicopter's fore/aft pitch servo was recently removed and replaced.

The pilot held an airline transport pilot certificate with a rating for rotorcraft helicopter. He also held a commercial pilot certificate, with ratings for airplane single-engine land, airplane multiengine land and instrument airplane. In addition, the pilot held a flight instructor certificate with ratings for rotorcraft helicopter and instrument rotorcraft. The pilot's most recent Federal Aviation Administration (FAA) first-class medical certificate was issued on December 5, 2015. According to company records, as of January 1, 2016, the pilot had accrued a total flight experience of approximately 6,053 hours; of which, 5,548 hours were in helicopters and 1,532 of those hours were in the same make and model as the accident helicopter.

The copilot held a commercial pilot certificate with ratings for rotorcraft helicopter and instrument helicopter. His most recent FAA second-class medical certificate was issued on May 16, 2016. According to company records, as of July 31, 2016, the copilot had accrued a total flight experience of 4,090 hours; all of which were in helicopters.

The 41-seat capacity helicopter was manufactured in 1974.