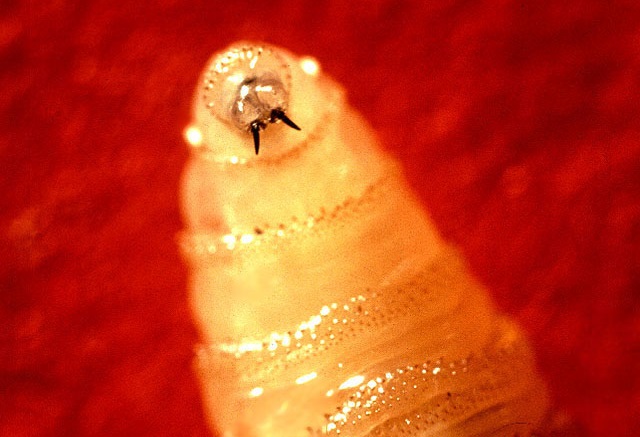 A foreign maggot species that feeds on the living flesh of animals and humans has recently been discovered for the first time on the Florida mainland. The invasive species, called New World screwworms, are fly larvae (maggots) that can infest livestock and other warm-blooded animals, including people.

Once confined to only the Florida Keys, the United States Department of Agriculture confirmed the presence of the screwworm in a stray dog near Homestead, Florida.

The dog was isolated and his infested wounds were treated. Officials say that the he is now in good health.  Federal and state officials have since started active surveillance in the area.

Screwworms were first confirmed on October 3, 2016 in Key deer from National Key Deer Refuge on Big Pine Key, Florida. This initial presence of screwworm was the first local detection in the United States in more than 30 years and Florida’s Commissioner of Agriculture, Adam Putnam declared an agricultural state of emergency in Monroe County, Florida.


Since October, thirteen Keys had known infestations mostly in the key deer population, with five confirmed infestations in domestic animals. Animal health and wildlife officials at the state and federal levels say that they have been working aggressively to eradicate this pest.


While human cases of New World screwworm are rare, they have occurred, and people are urged to keep wounds clean and closely monitor open cuts and wounds for the presence of maggots. Anyone who suspects the presence of screwworms should contact a physician immediately. So far, no human cases have been reported in Florida.