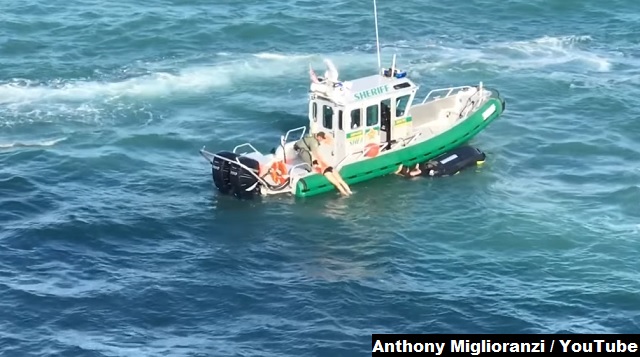 PORT CANAVERAL, Florida - A Brevard County Sheriff's Deputy saved two women who fell off a jet ski from a fatal collision with a oncoming cruise ship on Saturday in Port Canaveral, Florida.

Just before 5 p.m. on Saturday, March 11, 2017, SeaPort Security Marine Deputy Taner Primmer was providing a security escort for the Carnival Magic cruise ship when 19-year-old Skylar Penpasuglia and 20-year-old Allison Garrett, both of Princeton, West Virginia, were enjoying Spring Break and operating a jet ski in the Atlantic Ocean near Port Canaveral.  One of the women had fallen from the jet ski. When she tried to climb back onboard, the jet ski flipped upside down. As the two frantically tried to right the jet ski, the wind and current pulled them into the Port channel and in the direct path of the outgoing cruise ship.

Due to the narrow width of the Port’s channel, there was very little room to maneuver the 1,000-foot-long cruise ship. However, Port Canaveral Harbor Pilot Captain Doug Brown was able to slightly veer the ship when Deputy Primmer steered his patrol boat into the path of the cruise ship in order to rescue the women.

When the women were safely aboard, Deputy Primmer immediately backed the Safe Boat out of the Carnival Magic’s path and into an area of safety.

"I could not be more proud of the actions of Deputy Tanner Primmer, a member of our SeaPort Security Marine Unit who placed his life in peril without hesitation to rescue the Port visitors, and the Port Canaveral Harbor Pilot Capt. Doug Brown who not only maintained communication with Deputy Primmer, but was able to safely veer the ship, which provided Deputy Primmer the extra seconds needed to save the young girls," said Brevard County Sheriff Wayne Ivey.

The harrowing incident was captured on video by a cruise passenger, Anthony Miglioranzi, who later posted the video on YouTube.