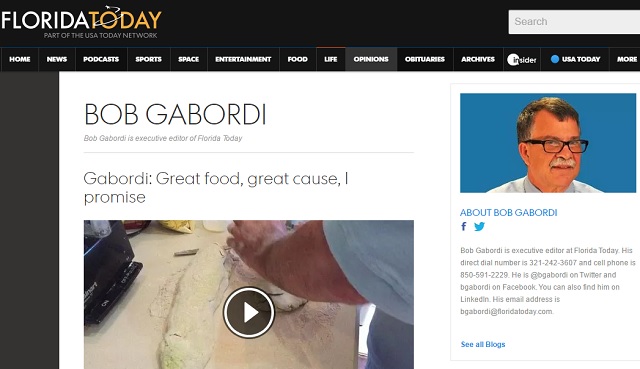 I have received your notice that I have been banished from Florida Today for expressing opposing viewpoints. True to form, the newspaper can't even fire a reader and forum contributor without an ethical lapse:

A week before my March 2nd letter-to-the-editor was published in the newspaper offering a new tech idea for washing and returning lagoon muck, insitu, you censored me online by taking down my forum replies to what I believe is your obviously fake 'Fact Checkers United' anonymous Facebook page. Instead of denying my allegation that you created the faceless social media page for the purpose of countering my criticism of some of your editorial positions, you expelled me. You then informed me on February 28th (four days before using my letter) that I have been banished from Florida Today. What a cowardly and unprofessional thing to do. After declaring me persona non grata from the website you should not have published my letter. Or, you should have given me notification and the option to withdraw it. In other words, I should have had the opportunity to disassociate with your print property just as you have disassociated with me online for merely posting viewpoints in opposition to your editorials.

It's been a long time coming. You've had a chip on your shoulder ever since you landed at Florida Today. Right away you took a potshot at me online for expressing an opinion that you didn't like. I had criticized the newspaper for its latest promotional Kumbaya on the waterfront, including the front page picture of a guy reading the newspaper at the event. I saw it as blatantly opportunistic on a very sensitive story about an existential threat to our region – a dying Indian River Lagoon. Remember? Before your PR push, very few serious stories had appeared in the newspaper on the collapse of Central Florida's critical environmental resource. While Florida Today was trying to catch up and get on board the issue, I was in the trenches doing something meaningful to save the estuary, or at least the Banana River, by making antiquated sanitary infrastructure a political issue in Cocoa Beach, where the bureaucrats and politicians would eventually agree to video inspect, document and completely rehabilitate the city's sewer lines and manholes with a $6 million state grant. The video inspection phase was one of Jim Waymer's first local stories as an environmental reporter for Florida Today. It was the first and only time I spoke with Jim. Like you, he also internalizes opposing viewpoints.

It's a good thing, though, that Brevard's elected leaders act like adults. Jim Barfield called me after I criticized the county's environmental bureaucrat, Virgina Barker, in a letter-to-the-editor for having stated in a guest column that the county, indeed, had a written plan to fix the lagoon – the 1996 Indian River Lagoon Comprehensive Conservation and Management Plan (IRLCCMP). Ms. Barker had taken us all for fools. The document was nowhere to be found on the county's website, and it was merely a set of broad objectives by the various state, federal and local agencies, not a local restoration plan. Barfield assured me that a real plan was in the works, and he asked me to be patient. Exposing the county's indifference to the crisis was, in my opinion, the genesis of the Save Our Lagoon plan. Your newspaper and its award winning environmental reporter never reported the lack of a restoration plan. The most you could muster was a column calling for “a summit to pull these people together into a single room to talk.” As if that hadn't already happened, ad nauseum.

Florida Today's coverage of the Brevard Public Schools software scandal was yet another whitewash of a critical issue and an egregious ethical lapse, this time by its celebrated 'watchdog' and public interest editor, Matt Reed. Reed's flagrant conflict-of-interest of simultaneously pursuing a job with the very subject of his ongoing “investigative” analysis, and his concealment that the software contract had been rendered null and void seven years before the school district threw away $6 million to a company not party to the agreement, was outrageous – and you defended it, Bob. Reed claimed he had spent months on “thousands” of pages of evidence. It took me 45 minutes with a fraction of the documents to zero in on precisely where the malfeasance occurred, which I posted online to his story. To this day, you and the newspaper have not reported the truth.

With such a track record for treating government with kid gloves, Florida Today can now be expected to look the other way when tens-of-millions of dollars in lagoon contracts are awarded over the next decade to no-bid, insider recipients. Tens-of-millions more will simply be wasted, much of it through the incredibly inefficient demucking program that cries out for innovation. Just as you didn't call out Virginia Barker on the non-existence of a restoration plan, Florida Today will likely turn a blind eye to the waste of restoration tax dollars that should go toward innovation and modern infrastructure.

The public's only hope that the lagoon initiative will not be another corrupt government boondoggle is Scott Ellis and his authority to audit. Speaking of which, that was another ethical lapse – Florida Today's political hit piece against Ellis by John Byron. You failed to disclose to the reader that columnist Byron was a political patron of Dave Netterstrom, the well-heeled establishment challenger to incumbent Clerk of Courts, Scott Ellis. The day the online version appeared you promised me in a return voice message that a disclaimer on Byron's piece would be added to the online version, as well as the newspaper that was going to press later that day – but you reneged, and no editor's note appeared in either form. So, on election day it did my ailing heart good to see Netterstrom, Byron and Florida Today crushed by Ellis' landslide victory. There exists no better political response than annihilation and humiliation at the polls. Bravo.

But then you took the treachery to a new height. Ever the political manipulators, your newspaper deliberately underreported the crowd size at President Donald J. Trump's recent rally, which forced Melbourne airport officials to protect their own integrity by reporting that their attendance numbers were almost twice what Florida Today had claimed. Your subsequent front page correction piece did little to regain lost credibility for the newspaper, especially given the bizarre, but telling headline.

Here is what I posted to your mea culpa on having fudged the Trump Rally numbers: “...kudos, Bob, for finally acknowledging with your headline what we already know when dealing with your industry and its lies, distortions and omissions, 'Facts aren't always so factual.'”

According to your own words that was your breaking point, the “last straw,” and you suspended my forum posting privileges. So I'm curious, why take personal offense? I didn't write the headline, you did, Bob. What did you expect, high praise for more political shenanigans, then acknowledging in a column that it's just what you people do?

So you've finally silenced your editorial nemesis, Mark Clancey. Congratulations. Put yourself in for a raise, and be sure to take a Stuart Smalley moment in front of the mirror, or a walk on the beach.

Joking aside, despite our many disagreements and heated exchanges, I wish you and your staff at Florida Today well. No hard feelings...

PS: I leave the FT forum knowing that I accomplished most of what I set out to do: Raise awareness to the plight of the Indian River Lagoon, especially ground zero (Banana River, Cocoa Beach). Changing the culture of the area's newspaper, however, needs to be taken up by someone with a kinder, gentler way with words. 'Cause it ain't me.

PSS: “My own opinion is enough for me, and I claim the right to have it defended against any consensus, any majority, anywhere, any place, any time. And anyone who disagrees with this can pick a number, get in line, and kiss my ass.” ― Christopher Hitchens