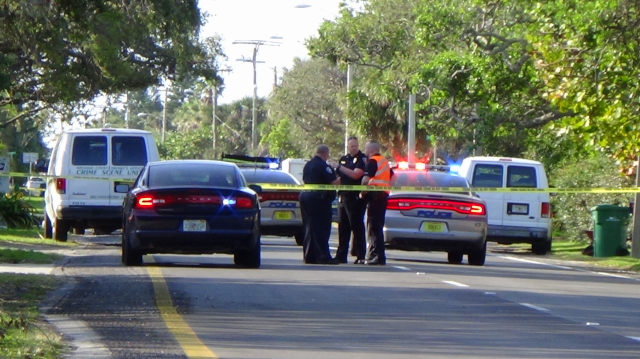 COCOA BEACH, Florida - A pedestrian did not survive the injuries that he sustained after being struck by a vehicle early Thursday morning on South Orlando Avenue (State Road A1A) between Second Street South and Third Street South in Cocoa Beach, Florida.

The Cocoa Beach Police Department, Cocoa Beach Fire Department, and Brevard County Fire Rescue were called to the scene at 4:15 a.m. on March 9, 2017, following a report of a white male being struck by a vehicle that had fled the scene. Police have identified the victim as 37-year-old Brian Holley of Cocoa Beach, Florida.

Investigators are searching for a vehicle of interest described as a large 4-door, white pick-up truck (Dually), towing a center-console boat with a dark hull. There is also a large cooler located in the bed of the truck.

The southbound lanes of South Orlando Avenue were closed to traffic for several hours this morning while investigators processed the crime scene.

Anyone who may have information pertaining to this case is asked to contact the Cocoa Beach Police Department at 321-868-3251.