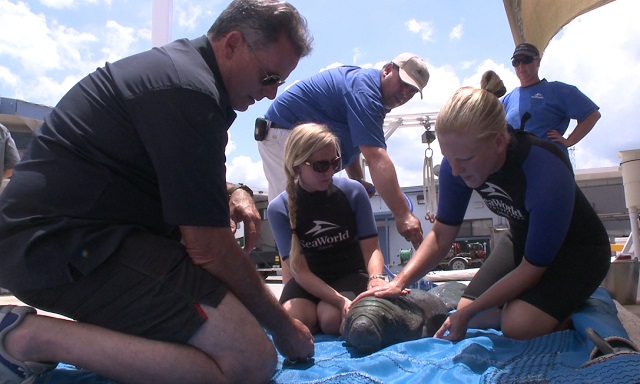 BREVARD COUNTY, Florida – Almost three years after she was rescued, a female manatee has returned to the Florida’s natural waters. Amidst cheers and bittersweet tears, SeaWorld Orlando’s Rescue Team returned Blanche to Port St. John, Florida and watched her swim away, ready to begin her life in the wild.

On July 21, 2014, Blanche was an orphan calf, estimated to be only two weeks old, when she was found swimming alone in the Indian River Lagoon. She was rescued by Florida Fish and Wildlife Conservation Commission (FWC) and brought to SeaWorld Orlando. Weighing in at only 48 pounds and measuring 48 inches in length, Blanche required around-the-clock care, including regular bottle feedings. She responded well to the immediate care she received and continued to thrive at SeaWorld’s Manatee Rehabilitation Center. Each day marked another day closer to the ultimate goal of being returned to her natural environment.

One of the most critical components to manatee rehabilitation is weight gain. Rescued orphaned manatees must weigh at least 600 pounds before they can be considered strong candidates for return by the Florida Fish and Wildlife. Today, Blanche weighs an amazing and healthy 775 pounds.

SeaWorld Orlando’s Rescue Team and FWC recorded Blanche’s final measurements moments before release and fitted her with a belt that will allow the Sea to Shore Alliance to monitor her success and track her path in the wild. Blanche is the sixth rehabilitated manatee SeaWorld has released to the natural environment this year.