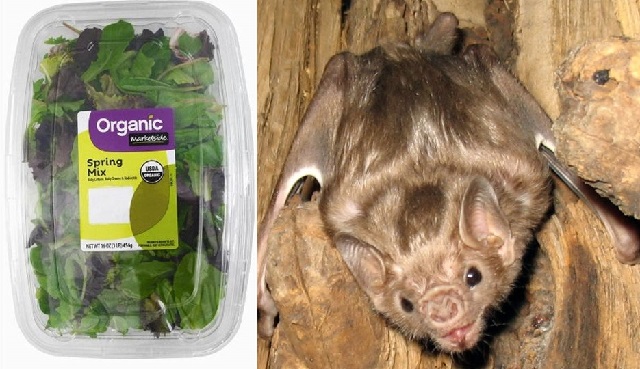 ORLANDO, Florida - A bat discovered in a prepackaged salad bought at a Florida Walmart has prompted a recall of the product throughout the Southeastern United States.
Two people in Florida reported eating some of the salad before the bat was found. The bat was sent to the U.S. Centers for Disease Control and Prevention (CDC) rabies lab for laboratory testing because bats in the United States sometimes have been found to have this disease. However, the deteriorated condition of the bat did not allow for CDC to definitively rule out whether this bat had rabies.

The CDC, the Florida Department of Health, and the U.S. Food and Drug Administration (FDA) to support an investigation of a dead bat that was found in a packaged salad purchased from a grocery store in Florida.

Transmission of rabies by eating a rabid animal is extremely uncommon, and the virus does not survive very long outside of the infected animal. CDC and the Florida Department of Health are evaluating the people who found the bat in the salad.

"In this circumstance, the risk of rabies transmission is considered to be very low, but because it isn’t zero, the two people who ate salad from the package that contained the bat were recommended to begin post-exposure rabies treatment," the CDC stated. "Both people report being in good health and neither has any signs of rabies. CDC is not aware of any other reports of bat material found in packaged salads."

On April 8, 2017, Fresh Express issued a recall of a limited number of cases of Organic Marketside Spring Mix. The salads were sold in a clear container with production code G089B19 and best-if-used-by date of APR 14, 2017 located on the front label. The recalled salads were distributed only to Walmart stores located in the Southeastern region of the United States. All remaining packages of salad from the same lot have been removed from all store locations where the salad was sold.

Consumers who may have already purchased the recalled product should discard and not consume it. A full refund is available where purchased or by calling the Fresh Express Consumer Response Center toll-free at (800) 242-5472 during the hours of 8 a.m. to 7 p.m. Eastern Time.