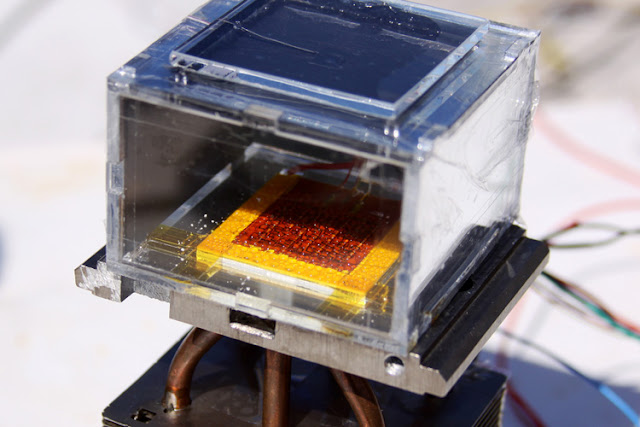 Scientists at MIT and UC Berkeley have developed a revolutionary water harvester that can extract water from desert air by only using the power of the sun.

Technologies already exist for extracting water from very moist air, such as “fog harvesting” systems that have been deployed in a number of coastal locations. And there are very expensive ways of removing moisture from drier air such as dehumidifiers that require a large amount of expensive electricity. But this new device is the first that has potential for widespread use in virtually any location, regardless of humidity levels, and without the electric bill.

By using a special material called a metal-organic framework, or MOF, this water harvester uses only ambient sunlight to pull liters of water out of the air each day in conditions as low as 20 percent humidity, a level common in arid areas.

The revolutionary prototype, under conditions of 20-30 percent humidity, was able to pull 2.8 liters (3 quarts) of water from the air over a 12-hour period, using one kilogram (2.2 pounds) of MOF. Rooftop tests at MIT confirmed that the device works in real-world conditions.

“One vision for the future is to have water off-grid, where you have a device at home running on ambient solar for delivering water that satisfies the needs of a household,” said Omar Yaghi, a professor at UC Berkeley who invented metal-organic frameworks more than 20 years ago. “To me, that will be made possible because of this experiment. I call it personalized water.”

MOFs combine metals like magnesium or aluminum with organic molecules in a tinker-toy arrangement to create rigid, porous structures ideal for storing gases and liquids. Since then, more than 20,000 different MOFs have been created by researchers worldwide. Some hold chemicals such as hydrogen or methane: the chemical company BASF is testing one of Yaghi’s MOFs in natural gas-fueled trucks since MOF-filled tanks hold three times the methane that can be pumped under pressure into an empty tank.

In 2014, Yaghi and his UC Berkeley team synthesized an MOF – a combination of zirconium metal and adipic acid – that binds water vapor, and he suggested to Evelyn Wang, a mechanical engineer at MIT, that they join forces to turn the MOF into a water-collecting system.

The system Wang and her students designed consisted of more than two pounds of dust-sized MOF crystals compressed between a solar absorber and a condenser plate, placed inside a chamber open to the air. As ambient air diffuses through the porous MOF, water molecules preferentially attach to the interior surfaces. X-ray diffraction studies have shown that the water vapor molecules often gather in groups of eight to form cubes.

Sunlight entering through a window heats up the MOF and drives the bound water toward the condenser, which is at the temperature of the outside air. The vapor condenses as liquid water and drips into a collector.

While these initial experiments have proved that the concept can work, the team says there is more work to be done in refining the design and searching for even more effective varieties of MOFs. The present version can collect water up to about 25 percent of its own weight, but with further tuning, they think that proportion could be at least doubled.

The findings were reported in the journal Science.