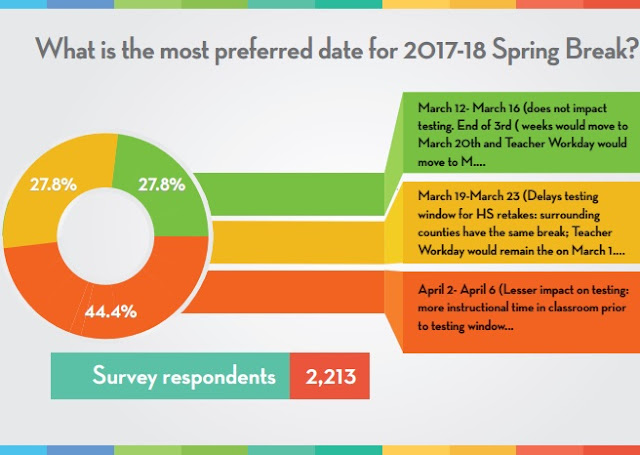 BREVARD COUNTY, Florida - Although a majority of survey respondents said that they wanted an earlier spring break in March rather than April, Brevard Public Schools will once again have a late Spring Break next school year.

Many teachers and parents complained that the late spring break this year caused students to become over-stressed and burned out. So Brevard Public School Board members asked BPS administration to reevaluate the spring break schedule for next year.

In response, the BPS administration conducted an online poll of staff and the public that drew 2,213 respondents.

The survey found that a majority of the respondents (55.6%) preferred an earlier spring break in March while 44.6% preferred keeping spring break during the first week of April.

Despite the survey results, the BPS administration announced that it will keep the late spring break schedule for the 2017-2018 school year.

School Board members said during their May 23 meeting that they would consider that feedback in setting the calendar for the 2018-2019 school year.
Labels: Brevard County Public Schools