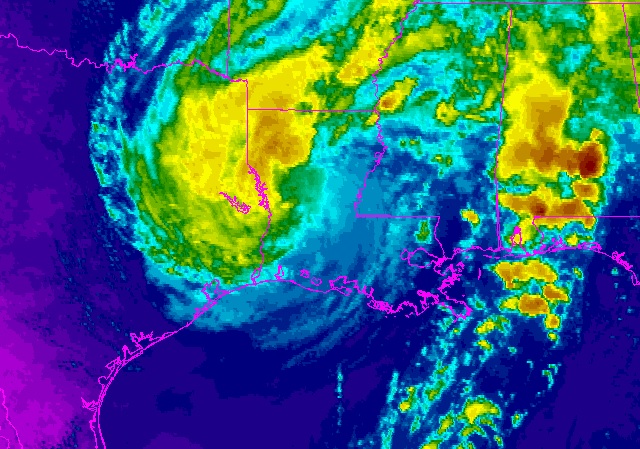 Gradual weakening is forecast during the next 48 hours as Harvey moves farther inland.

NHC projects that Harvey will have the following wind speeds through this week: 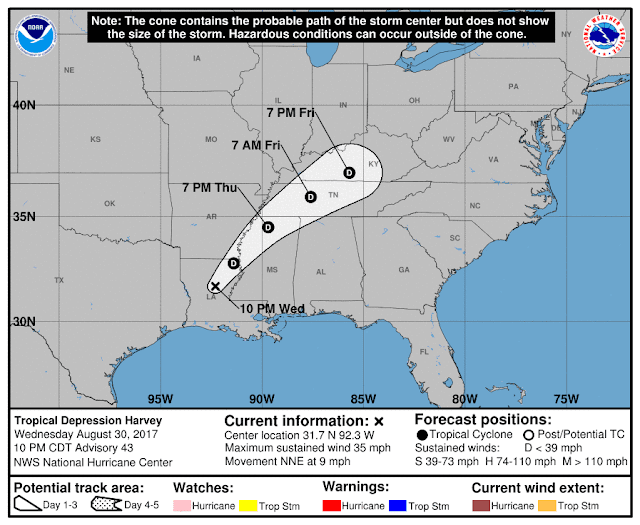 NHC forecasters say that Harvey is expected to continue north-northeasterly through tonight.  A turn toward the northeast is expected Thursday night and Friday.

On the forecast track, the center of Harvey should move through central Louisiana tonight, then move through northeastern Louisiana and northwestern Mississippi Thursday and Thursday night, and over the Tennessee Valley region on Friday.

RAINFALL: Harvey is expected to produce additional rainfall accumulations of 4 to 8 inches from southwestern Louisiana and the adjacent border of eastern Texas northeastward into western Tennessee and Kentucky through Friday with isolated amounts up to 12 inches.

The threat of heavy rains has ended in the Houston/Galveston area. However, catastrophic and life threatening flooding will continue in and around Houston, Beaumont/Port Arthur, eastward into southwest Louisiana for the rest of the week.

Elsewhere, the outer bands of Harvey are expected to produce additional rainfall amounts of 3 to 6 inches over portions of the central and eastern Gulf States and 2 to 4 inches farther north into parts of the Tennessee Valley, Ohio Valley and southern Mid Atlantic through Saturday.

STORM SURGE: Water levels along the northwestern and northern Gulf coast should subside very slowly over the next day or two.