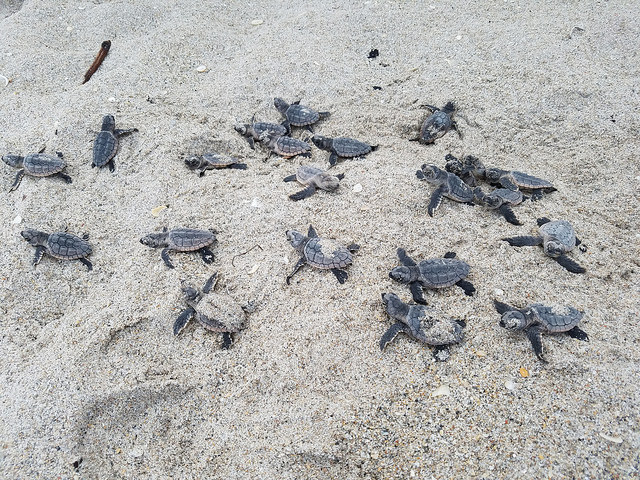 BREVARD COUNTY, Florida - Hurricane Irma took a devastating toll on incubating sea turtle nests in the Archie Carr National Wildlife Refuge, one of the most important loggerhead and green turtle nesting sites in the world, according to new estimates from the UCF Marine Turtle Research Group.

Researchers found significant dune erosion that swept away some nests and exposed the eggs of others. It was a record year for green turtle nesting along the refuge’s beaches in southern Brevard County, but storm surge due to Hurricane Irma destroyed many unhatched loggerhead and green turtle nests. UCF researchers estimate that of nests laid through the end of September, more than half of the season’s green turtle nests and a quarter of loggerhead nests were lost.

“Last year with Hurricane Matthew, we lucked out because it was a low green turtle year,” said Kate Mansfield, assistant professor and director of the UCF Marine Turtle Research Group, noting that green turtles typically have alternating high and low nesting years. “This year was an extraordinarily exciting year for green turtle nesting, breaking all previous records within the refuge and continuing the conservation success story for the species. Unfortunately, we had another big hurricane this year, highlighting the need for continued conservation efforts in the area.”

Green turtles set a new record in 2017, laying 15,744 nests in the sands of the 13 miles of the Brevard County portion of the Archie Carr National Wildlife Refuge monitored by UCF. An estimated 8,830 of those were lost to the storm. Green turtles nest later in the season than other species, so many of their eggs hadn’t hatched by the time Irma hit. Some 56 percent of total green nests were lost, an estimated 81 percent of those that were still incubating.

Along the same stretch of beach, loggerheads laid 9,690 nests in 2017, but most had already hatched when Irma passed through the region. Still, an estimated 2,290 loggerhead nests were lost. That’s 24 percent of the total loggerhead nests and 91 percent of those that were still incubating when hurricane-driven storm surge came ashore.

The refuge is located at the northern extent of dense leatherback nesting in Florida, but the species nest in far fewer numbers, laying just 23 nests in 2017 within the portion of the refuge monitored by UCF. But they nest earlier than greens and loggerheads, and all of the leatherback nests had finished incubating before the hurricane.

UCF also monitors another 16.4 miles of beaches north of the wildlife refuge, at Patrick Air Force Base and in central Brevard County. Considerably fewer nests are laid there than in the Archie Carr National Wildlife Refuge, but the numbers are still high compared to many other parts of the country. On those beaches, an estimated 642 of 2,251 green turtle nests and 831 of 6,229 loggerhead nests were lost due to the hurricane.

The UCF Marine Turtle Research Group also found evidence that some green turtle hatchlings have emerged since the hurricane. And some turtles have continued to come ashore and lay new nests. Within the wildlife refuge, 466 new green turtle nests and eight new loggerhead nests were laid in September following Irma. Along the other UCF-monitored beaches, 72 new green nests and three new loggerhead nests were laid.

Still, the nests aren’t out of danger.

“Green turtles are still nesting, but recent extremely high tides have likely wiped out many of those new nests, too,” said Erin Seney, an assistant research scientist with the UCF group. “The good news is that the nesting habits of sea turtles do protect them from large-scale nest loss and make them more resilient to this kind of event. They lay multiple nests per nesting season, roughly every other year for 30 years or more.”