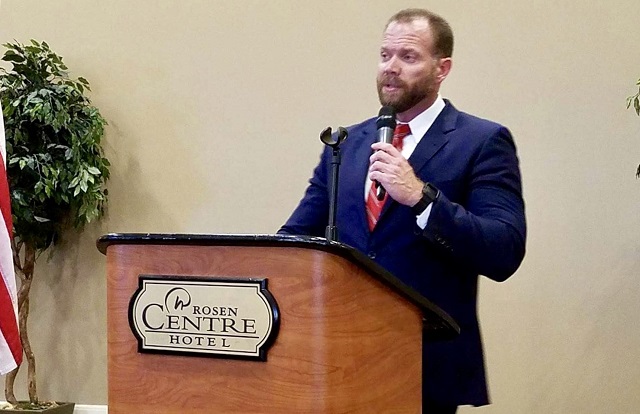 MELBOURNE, Florida - Local political activist Matt Nye has filed to run against Representative Thad Altman in the District 52 Florida House race. Mr. Nye organized the Brevard Tea Parties and currently serves as the Chairman of the Republican Liberty Caucus, the national parent organization of the local Republican Liberty Caucus of Central East Florida, which he founded back in 2008.

“The citizens of Florida deserve a state representative who will work to reduce, not expand, government, and who will not use the position as leverage for personal gain,” Mr. Nye said. “From his earliest days on the County Commission to his most recent position as a State Representative, Thad Altman has a consistent record of placing the interests of lobbyists and special interests above those of his constituents. When one is drawing a $160K annual salary for a do-nothing position without qualifications one is obligated to carry water for other folks whose votes are needed to keep your own bread buttered.”

Matt Nye is a citizen watchdog and outspoken critic of government spending and waste. In July of 2012, Mr. Nye filed the criminal complaint against former Clerk of Courts Mitch Needelman that led to the investigation and arrest of Needelman, lobbyist Matt Dupree and BlueWare CEO Rose Harr for an $8.52 million bid rigging scandal. Matt worked with then former Clerk of Courts Scott Ellis to compile the list of evidence presented to FDLE. The Needelman case is the largest corruption case prosecuted in Brevard County with the trial scheduled for October 16th.

“It seems as though most all we have are elected officials whom do and say anything to get elected,” Mr. Nye said. “Some are outright crooks shamelessly feathering their nests through sweetheart jobs, contracts, and political money changing committees, and others weakly submit to going along to get along, voting as they are told by party leaders, lobbyists, and moneyed interests. All vote in direct contradiction of their campaign promises.”

“I’m here to give the voters a true option – a candidate that will actually follow through on the promises he makes.”

Matt Nye, 45, is a native Floridian and a nine-year resident of Suntree, where he lives with his wife, Natalia, and their two dogs Lily and Cookie. Matt works as a Regional Director for Verteks Consulting, a leading provider of voice and data networks and serves in various Republican positions as well as serving as the Treasurer of the Rotary Club of Suntree.
Labels: POLITICS