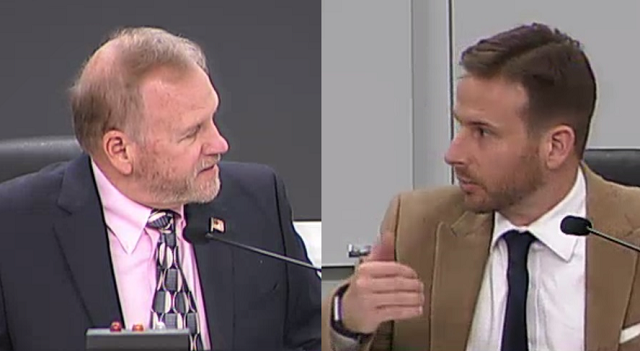 The religious eruption between the two Commissioners occurred during a discussion over Tobia's motion to audit Community Redevelopment Agencies after Brevard County Attorney Scott Knox rendered an opinion that the Downtown Melbourne Community Redevelopment Agency (CRA) and Olde Eau Gallie CRA festival expenses were not in compliance with Florida Statutes and that the CRAs owed the County approximately $311,000.

"I'm kinda torn with this, I don't know enough facts to feel comfortable voting for it," said Smith. "I reserve the right to investigate it further. And if I change my mind and say that there is something here that needs to be investigated, I'd be happy to bring it up again. But right now, I'm not in favor of it."

"I just want to find out what the level of comfort is. We have an Attorney General of the State of Florida saying what they did was inconsistent with statute, we have the County Attorney whose saying it is inconsistent," Tobia responded. "Short of Jesus Christ coming down here and telling us this is inconsistent, what is it your looking for to find out that will get you across that hump that we probably need to do our job and make sure that County funds that are being expended are being expended consistent with state statute?"

"I find it odd that you invoke the name of Jesus Christ since you don't believe in him anyway," Smith retorted.

Smith is known to emphasize that he is a devout Christian during his political campaigns.