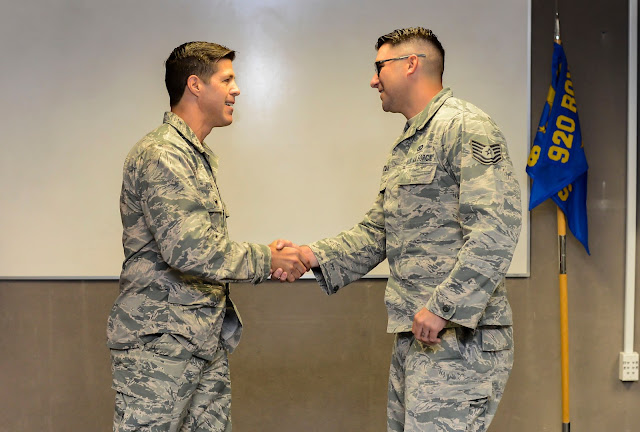 PATRICK AIR FORCE BASE, Florida - U.S. Air Force Tech. Sgt. Shaun Hartman may go down in Brevard County history as the most unsung hero of all time. That's because we in local media repaid Hartman for going above and beyond the call of duty by failing to thoroughly do our own jobs to identify the true hero of the day.

While surf fishing off the beach at Patrick Air Force Base, Florida, Tech. Sgt. Shaun Hartman risked his life to save eight people who were caught in rip currents on April 14, 2017.

Heading into Easter weekend, at the height of Florida's Spring Break, 31-year-old Hartman,of Rockledge, Florida, took his family to enjoy some beach time on Good Friday. Just after casting his fishing line at approximately 6 p.m., Hartman noticed a distressed man in the water.

“It sounds like he’s yelling for help,” said Hartman turning to a distracted woman who appeared to be with the man. “Hey, he’s going to drown. I gotta go get him!” said Hartman as he handed the woman his fishing rod and directed her to reel it in if she got a bite while he dove into the surf after the man.

“It just sucked me in,” said Hartman. Despite the strong current, he fought to swim toward the man. Noticing the man was visibly panicked, Hartman tried calming him while instructing him on how to break free of the rip current.

“I put my hand under his armpit and we were fighting against the current. It was pretty intense.” Hartman’s wife and two young kids were cheering him on from the sand as Hartman and his rescuee struggled toward land, exhausted.

After a celebratory pause, the Hartman family resumed their beach time, but soon afterward a bus full of Junior Air Force ROTC cadets on Spring break from their high school in Georgia arrived to the beach.

Hartman, who served as an Air Force firefighter 10 years earlier, thought to himself, "I guess I’m not fishing anymore.”

Before Hartman had the opportunity to warn the students about the strong current, the students were already in the water. He kept his eye on the situation, but it didn’t take long before things turned for the worse.

“Like a toilet bowl, it was like ‘fulmp, fulmp,’ and one at a time they were get sucked in,” said Hartman of the strong rip current. Within seconds there were at least 10 people out there in trouble, he said.

Hartman said he was overwhelmed because there were so many of them. He ran over and yelled, “Everyone out of the water! Everyone out!”

He spotted one of the bigger kids who was on the south side of the rip current trucking through 4-foot waves putting kids on is back to get them out of the current, but he also noticed that his Herculean efforts were wearing on him.

Hartman said everything was happening so fast. He noticed what looked to be the ROTC instructor headed out to try and help and that’s when he told the kids to call 911. It occurred to Hartman that he was at risk for losing his own life if he went out there to save those kids, but he pushed that thought aside and said, “I’m going in!” thinking to himself, "it’s on!" as he dashed into the water.

“I felt the rip current and was able to walk in chest deep and not get sucked in,” he said.

He went to work pulling kids straight out of the rip current, but more were farther out in deeper water. He said someone yelled, "save him he’s drowning!" He yelled back, “I’m coming, don’t worry!” Hartman went back out 5-6 times, but there was one last kid farther out than all the rest had been. “All you see is hands at the top of the water doing that wave thing.” So Hartman swam back out.

“I just reached and grabbed his hands then we both got sucked under water. I hooked my arm under the kid’s armpit and said ‘relax, I’m going to get you in.'” He said the kid just went limp.

According to Hartman, as he swam toward shore, he saw a guy with a red flotation device burst over the sand dunes like he was storming the beaches of Normandy. He was followed by a Patrick AFB security forces Airmen running at full speed dressed in full military gear and combat boots. The Airmen removed his flack vest and rifle as he bolted right into the surf with his combat boots on to give him assistance.

“I never witnessed so much tenacity,” said Hartman. The two pitched in and helped Hartman in as his energy dwindled. When they made it to shore, the Patrick Air Force Base Fire Department was ready and waiting with oxygen bottles and medical gear to ensure everyone was breathing.

“My adrenaline was through the roof,” said Hartman who was having trouble comprehending how he had the energy to get all those kids to safety.

Everyone pitched in he said, his 9-year-old son was on the phone giving 911 directions. His wife was coordinating triage on beach ensuring everyone was away from the water’s edge and his daughter was offering comfort.

He was relieved to see Brevard Fire and Rescue arrive and take over the scene.

“I really think there was divine intervention as to why I was there and how I was able to help. I am in good shape, but not a PJ (pararescueman),” he said.

Three weeks after that harrowing day, and the local news cycle had grown stale before Hartma was ever recognized, Vice Wing Commander Col. Brett Howard, presented Hartman with the wing commander’s coin for his heroics at the 308th Rescue Squadron where Hartman serves as a medical logistics technician.

“Once again one of our Citizen Airmen stepped up and epitomized our Rescue motto, 'These things we do, that others may live'. We are honored and proud he is a member of our wing,” said Howard.

During this Holiday Season, the families of eight people saved by Hartma can rejoice and count their blessings rather than mourn because of his heroics.