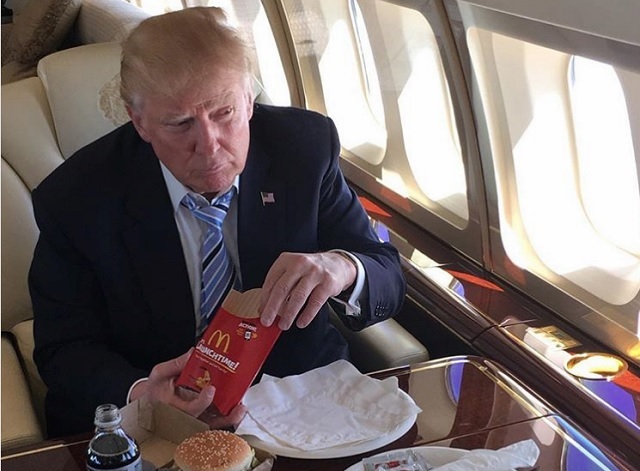 TITUSVILLE, Florida - Astronaut High School is clamping down on students bringing in fast food or ordering pizza instead of buying meals from its school cafeteria.

"This is a very important announcement regarding policy related to food being brought or delivered to school by students and families. State of Florida policy prohibits bringing outside meals from vendors into the school that does not meet nutritional regulations. This would include pizza deliveries, fast food such as McDonald's and Wendy’s, and other restaurants.

If food is brought or delivered for a student, the meal will be kept in the front office until the end of the day. The student may pick it up when the bell rings for dismissal. Students may purchase their lunch in our Five Star rated cafeteria or bring nutritional lunches to school that have been prepared at home. Thank you for your cooperation and understanding as we follow state and district food and nutrition policies! GOOOOO War Eagles!!!"

Astronaut High School student were quick to point out on social media that, when it comes to making a buck for themselves, school administrators and teachers throw the nutritional concerns for students out the window during fundraisers on campus and off-campus partnerships such as McTeacher's night.

The funds raised by schools with the profits from selling the fast food to students are known as "enterprise funds" that are highly sought after by the Brevard County School District because enterprise funds come without statutory restrictions.

The enterprise funds can be spent on whatever school administrators choose, such as outside pizza ordered for faculty parties, political campaigns to increase school taxes, and even Orlando Magic basketball tickets where artery-clogging quick-service foods are served.

Some students have expressed on social media that they would show their disdain for any such fundraisers in the future because of the enforcement of the outside food ban.

Policies Likely To Change In The Near Future

Although Astronaut High School did not cite the specific state policies, the Brevard County School District and State of Florida policies currently in place were promulgated in recent years as a result of federal guidelines under former President Barack Obama's Healthy, Hunger Free Kids Act.

“As parents, we try to prepare decent meals, limit how much junk food our kids eat, and ensure they have a reasonably balanced diet,” First Lady Michelle Obama said in 2012. “And when we’re putting in all that effort the last thing we want is for our hard work to be undone each day in the school cafeteria. When we send our kids to school, we expect that they won’t be eating the kind of fatty, salty, sugary foods that we try to keep them from eating at home."

However, President Donald Trump's administration is moving in a direction to repeal those stringent guidelines, vowing to 'Make School Lunches Great Again.' Currently, the USDA is re-evaluating how each food item is nutritionally credited into a meal for the National School Lunch Program.

No food or beverages, other than those associated with the District's food service program, are to be sold during the school day unless allowed by State or Federal procedures.

(2) Each district school board shall have the following responsibilities:

(c) To control the sale of food and beverage items in competition with the district approved food service program in accordance with 7 CFR 210.11 (6/28/13) ... Competitive food and beverage items sold to students during the school day must meet the nutrition standards for competitive food as defined and required in 7 CFR 210.11 .... Each district school board is permitted to grant a special exemption from the standards for competitive foods as specified above for the purpose of conducting infrequent school-sponsored fundraisers...