Watch The State of the Union Address 2018 Live, Excerpts Released 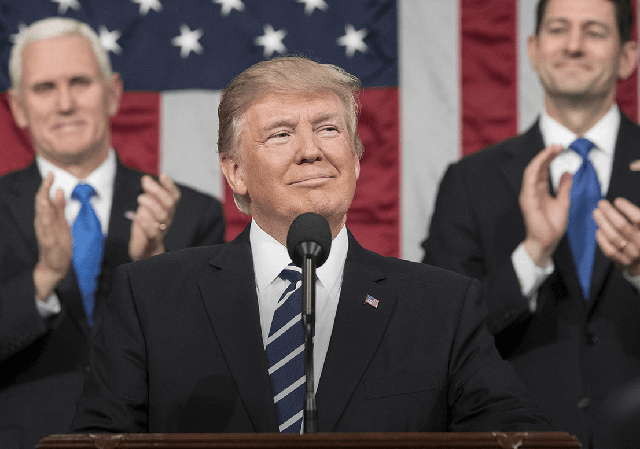 U.S. President Donald Trump will deliver his first State of the Union Address to Congress at 9 p.m. Eastern Time on Tuesday, January 30, 2018.

The White House released excerpts of President Donald Trump's 2018 State of the Union Address just hours before Trump is scheduled to speak.

Viewers can watch the State of the Union address live online via YouTube below.

Here are the excerpts released by the White House:

Together, we are building a SAFE, STRONG, and PROUD America.

Just as I promised the American People from this podium 11 months ago, we enacted the biggest tax cuts and reform in American history.

Since we passed tax cuts, roughly 3 million workers have already gotten tax cut bonuses – many of them thousands of dollars per worker.

This is our New American Moment. There has never been a better time to start living the American dream.

Americans love their country. And they deserve a government that shows them the same love and loyalty in return.

For the last year we have sought to restore the bonds of trust between our citizens and their government.

In our drive to make Washington accountable, we have eliminated more regulations in our first year than any administration in history.

America has also finally turned the page on decades of unfair trade deals that sacrificed our prosperity and shipped away our companies, our jobs and our nation’s wealth.

America is a nation of builders. We built the Empire State Building in just one year – isn’t it a disgrace that it can now take ten years just to get a permit approved for a simple road?

I am asking both parties to come together to give us the safe, fast, reliable, and modern infrastructure our economy needs and our people deserve.

Struggling communities, especially immigrant communities, will also be helped by immigration policies that focus on the best interests of American Workers and American Families.

So tonight I am extending an open hand to work with members of both parties, Democrats and Republicans, to protect our citizens, of every background, color, and creed.

As we rebuild America’s strength and confidence at home, we are also restoring our strength and standing abroad.

Last year I pledged that we would work with our allies to extinguish ISIS from the face of the earth. One year later, I’m proud to report that the coalition to defeat ISIS has liberated almost 100 percent of the territory once held by these killers in Iraq and Syria. But there is much more work to be done. We will continue our fight until ISIS is defeated.

Past experience has taught us that complacency and concessions only invite aggression and provocation. I will not repeat the mistakes of the past Administrations that got us into this dangerous position.
Labels: Donald Trump