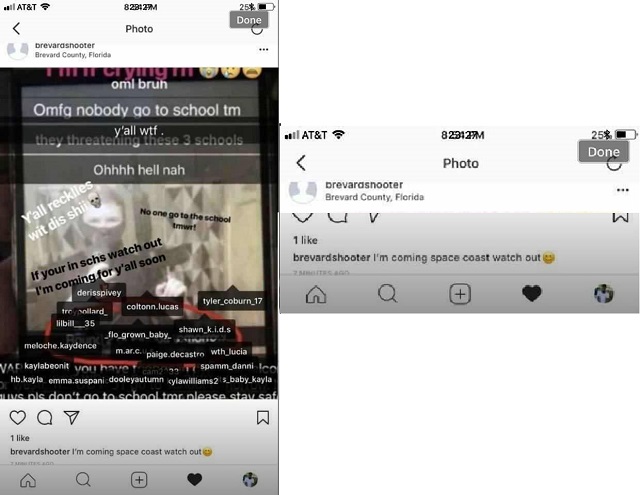 A teenager suspected of creating a Snapchat photo depicting a masked gunman with the caption "Round 2 of Florida" was arrested in South Carolina on Thursday.

The snapchat post went viral across the country due to heightened public emotions as a result of the Florida school shooting that occurred on Ash Wednesday at Marjory Stoneman Douglas High School in Parkland, Florida.

"Variations of the post have continued to be circulated over social media with captions added to warn people not to go to various schools throughout South Florida," the Broward County Sheriff's Office stated on Thursday.

Sheriff's deputies in Spartanburg County, South Carolina, arrested a Broome High School ninth grader who allegedly wrote the menacing caption over a photo of someone wearing a partial mask and holding what appeared to be an AR-15 rifle similar to the one used in the Broward County, Florida school shooting that left 17 people dead.

The Spartanburg County Sheriff’s Office was alerted to the disturbing threat when a classmate recognized the suspect in the Snapchat post and told a parent. Spartanburg deputies later located the mask and rifle, which turned out to be a pellet gun.

The teen, whose name is being withheld, allegedly said he was joking in the post.

According to the Brevard County Sheriff's Office, someone had taken the original "Round 2 of Florida" Snapchat post and modified it to make the post appear to threaten SpaceCoast Jr/Sr High School in Port St. John, Florida.

"Unfortunately, the post has now been reposted and shared countywide causing parents to be concerned about the validity of the post and threat," said Brevard County Sheriff Wayne Ivey.

"Please know that our agency and the FBI are continuing to investigate the “reposted” threat, however there is nothing to indicate that there is a valid threat to any of our schools. In an abundance of caution and to reassure our parents and students our agency has directed an increased presence of Deputies at SpaceCoast Jr/Sr High School where the reposted threat was alleged to occur."
Labels: Brevard County Public Schools crime Florida Port St. John South Carolina