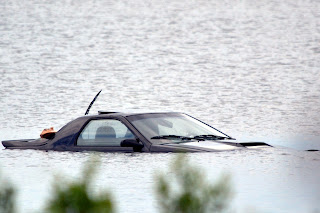 On September 6, 2011, at approximately 4:45 pm, the Brevard County Sheriff's Office received an emergency call from a witness who observed a man physically forcing a woman into a vehicle and fleeing from a beach access in the Patrick AFB area.

As deputies responded, they observed what they believed to be the suspect vehicle, which was west bound on Pineda Causeway.  As a deputy attempted to stop the vehicle, he observed an ongoing disturbance between the two occupants.  The driver refused to stop, lost control of the vehicle, and crashed into the Indian River.

The deputy immediately entered the river and approached the vehicle, which was partially submerged in approximately 4 feet of water.  As the deputy approached, he observed the male driver stabbing the female passenger. The deputy ordered the man to stop. The man refused to comply, which forced the deputy to use deadly force and shoot the suspect to stop further injury to the woman.

Another deputy then pulled the 45-year-old woman from the vehicle and carried her to the bank to initiate medical attention where she was then attended by Brevard County Fire Rescue and was responsive although she had suffered multiple stab wounds.

The suspect was pronounced deceased at the scene.  The victim was transported to the Holmes Regional Medical Center and was last reported in serious but stable condition.

The deputy who was involved in the shooting has been placed on administrative leave pending a FDLE investigation, which is standard procedure.

Westbound Pineda Causeway (State Road 404) was closed to one lane for a stretch between the Indian River and U.S. 1.

The Sheriff's Office is not releasing the name of any of the involved parties at this time.

Sheriff Jack Parker stated “There is no doubt in my mind that the actions taken prevented the woman from being brutally murdered.  I could not be more proud of the decisive and immediate actions of our deputy sheriffs.” 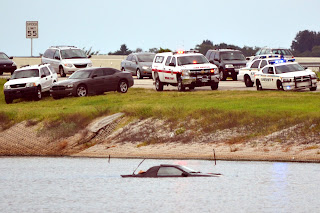 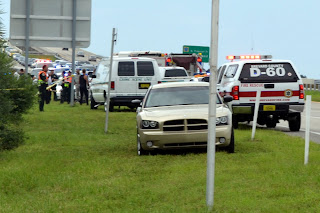