MERRITT ISLAND, Florida -- U.S. Congressman Bill Posey was attending a funeral for a longtime friend at a church in Merritt Island.  Someone had come into the reception afterwards and informed the Congressman that an alligator crawled under his car.

Brevard County Sheriff's Office deputies arrived and the alligator then ran under the sheriff deputy's car.  They called a trapper to remove the gator and as of yesterday the gator was on his way back to the wild.

"We're grateful that no one, including the gator, was harmed," said Congressman Posey's Press Secretary George Cecala.  "We thank local authorities and the trapper for responding and safely removing the gator and sending him back to the wild." 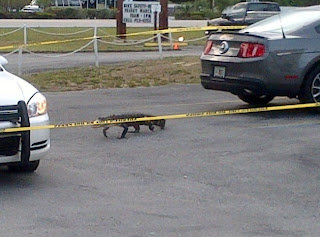