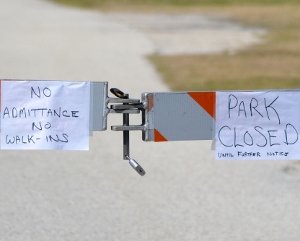 MERRITT ISLAND, Florida -- Kiwanis Island Park on Merritt Island will remain closed at least until Tuesday in the wake of reports of raccoon attacks on park-goers, officials said Monday.


Parks Director Jack Masson chose Monday morning to keep the park closed for activities at least until another assessment can be made on when the park is safe to reopen.  That assessment will be made Tuesday morning, he said.


The park was closed Saturday after two reported incidents in which park-goers were either bitten or injured by raccoons.  One raccoon attack was reported this past Wednesday, April 11, 2012, and a separate raccoon incident was reported Friday afternoon.
Brevard County Animal Services trapped two raccoons on Saturday, and another trapper contracted by Parks and Recreation trapped two more raccoons at the park Sunday morning.  So far, Brevard County's Animal Services agency and a hired trapper have captured a total of eight raccoons at Kiwanis Island Park, which is located off State Road 520 on Merritt Island along Florida's Space Coast.


It is not known what prompted the altercations between the raccoons and park patrons, said Parks and Recreation Director Jack Masson.  “We will err on the safe side,” Masson said Sunday.


Masson said the first altercation was reported Wednesday by a woman who was eating lunch under a park pavilion.  She was transported for medical treatment, but the extent of her injuries was unknown.  Then, on Friday, a mother and child were on the playground when the child was reportedly bitten by a raccoon.  The county Health Department was notified, which is procedure anytime a bite is reported, Masson said.