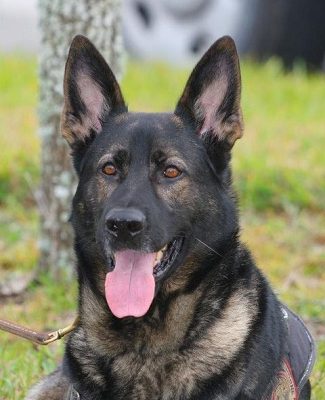 MELBOURNE, Florida -- While investigating an aggravated assault with a knife at 1:06 a.m. this morning in the 1100 block of Mathers Street in Melbourne, Florida, Melbourne Police officers encountered a suspect running from the crime scene still armed with a box cutter.

Police say that after numerous attempts to get the suspect to stop and comply with the officers, a Melbourne Police K-9 named DiOGi was released in an attempt to apprehend the suspect.

When DiOGi made contact the suspect’s leg, the suspect allegedly began to stab at the dog.  Fortunately for the police dog, the box cutter broke and DiOGi was not injured as he pulled the man to the ground.  Once on the ground, the suspect then attempted to choke DiOGi in an effort to continue to flee the scene.

DiOGi was undeterred and completed his mission which allowed the officers to take the suspect into custody.  DiOGi’s efforts in apprehending the suspect prevented the police officers from having to physically engage this armed suspect.

Melbourne police say that once again, the value of police work dogs was proven as the officers did not have to elevate their response to this suspect’s resistance.