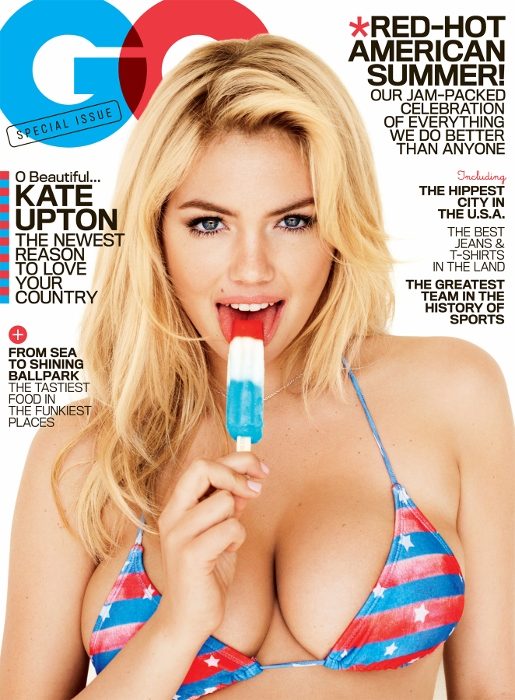 MELBOURNE, Florida -- 20-Year-Old Sports Illustrated swimsuit cover model Kate Upton, who was propelled onto the world stage from Brevard County, Florida by becoming a You Tube sensation with her "Dougie" dance, will now grace the cover of the July edition of GQ Magazine that hits news stands nationwide on June 28.

Going with a patriotic theme for the month of July, the cover photo features Kate Upton wearing a Stars and Stripes bikini while hold a red, white and blue popsicle to her open mouth and slightly protruding tounge.  The cover page caption reads, "O Beautiful... Kate Upton  The newest reason to love your country."

In addition to the revealing photo spread, the accompanying GQ article touches on Kate Upton's upbringing in Florida and conservative environment:

"She grew up in a traditional, all-American family: Dad’s a high school athletic director; mom stayed home with the kids. And though Kate grew up in Florida, she was born in the deeply conservative southwest corner of Michigan, where her uncle, Fred Upton, has been a Republican congressman for twenty years.

God-fearing? Kate has two tattoos: a horseshoe on her wrist and a small cross on the inside of her finger. “You have to think hard with a tattoo,” she says. “What will I love for the rest of my life?” Horses and Jesus seem like safe bets."