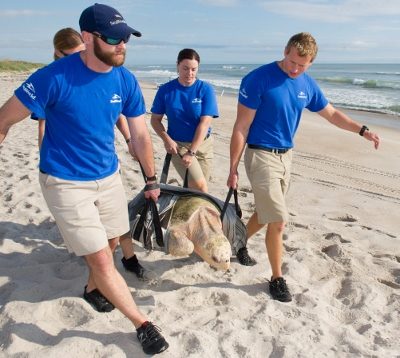 The first turtle was a large 140-pound loggerhead rescued from Melbourne Beach, Florida that came to SeaWorld Orlando due to an injury to its shell which  was likely caused by a boat strike.  Upon arrival at SeaWorld, the turtle received a health assessment and extensive treatment including blood work, X-rays and antibiotics.  All of the wounds to the turtle’s shell have since healed; however, a portion of its shell was lost in the process.

A smaller green sea turtle was also returned today.  This green turtle was found beached at Canaveral National Seashore with wounds to both its front flippers and neck caused by monofilament fishing line.  This turtle received a health examination upon arrival at SeaWorld and its wounds were treated weekly until being cleared for return to its natural environment.

For more than 45 years, SeaWorld Parks & Entertainment has helped animals in need -- ill, injured and orphaned.  More than 20,000 animals have been rescued by our experts.‪ SeaWorld’s animal rescue team is on call 24 hours a day, 7 days a week.