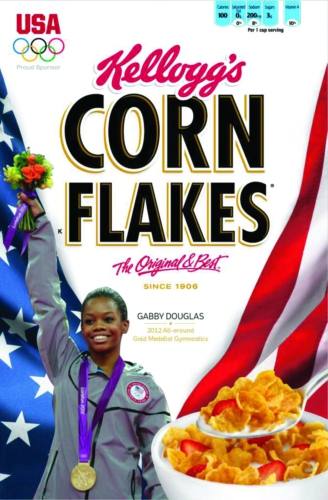 To celebrate U.S. gymnast Gabby Douglas' gold medal in the women's all-around at the 2012 Olympic Games in London, Kellogg's announced today that she will be featured on special-edition boxes of Kellogg's® Corn Flakes® which will be on shelves this fall.  Kellogg Company is an official sponsor of the United States Olympic Committee and USA Gymnastics.

"I'm so proud to be part of this gold-medal winning team and I'm thrilled I was able to bring home the all-around gold for Team USA as well," said Douglas.  "The support from fans around the country has been amazing, and it's a huge honor to see ourselves on a cereal box that our fans can all own and enjoy!"

"We are proud to support the potential of our young athletes and our amazing team of U.S. gymnasts," said Doug VanDeVelde, senior vice president of Morning Foods, Kellogg Company.  "Over the course of the past week, we have all shared in the thrilling moments and passion of USA Gymnastics, and we are excited to bring that into the homes of families across the country."

"Gabby Douglas has helped Team USA make history this week.  The team gold was the first since the 1996 Olympic Games and this is the first time that USA Gymnastics has captured both the team gold and the individual all-around gold medal," said USA Gymnastics President, Steve Penny.  "She also became the third consecutive American gymnast to win the all-around gold medal, making this an even more significant accomplishment."

The cereal company will not only bring your favorite gymnasts to your breakfast table, they are the title sponsor of the 2012 Kellogg's Tour of Gymnastics Champions, a 40-city national tour featuring Team USA's top performing gymnasts which will kick off in San Jose, California on September 8, 2012.  For tickets go to www.kelloggstour.com.