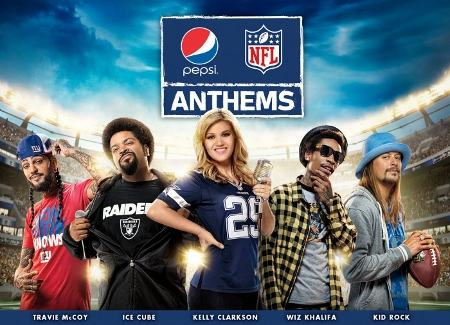 Pepsi and the National Football League (NFL) today announced the launch of the Pepsi NFL Anthems program, a national campaign that will feature some of today's most talented musical artists, iconic NFL teams, and exciting players.

The program will bring to life four originally created anthems by Kid Rock, Kelly Clarkson, Ice Cube and Travie McCoy, as well as a remixed version of Wiz Khalifa's 'Black and Yellow,' an anthem that swept the nation last season. The anthems were inspired by the artists' passion for their cities and hometown NFL teams.

Clarkson, global superstar and two-time Grammy Award winner, today released her Dallas-themed anthem 'Get Up (A Cowboys Anthem).' "Everyone knows that I am a huge Cowboys fan, and having the chance to be a part of the Pepsi NFL Anthems program and create a custom song for the team and city of Dallas overall was an honor," she said. The remaining songs will be debuted weekly and available for free download at www.PepsiAnthems.com until 2/28/13.

Travie McCoy's New York Giants anthem, titled 'All In,' will be exclusively available at retail stores, including Wal-Mart, on specially marked 24-packs of Pepsi, Diet Pepsi and Pepsi MAX. McCoy's song can be downloaded as of today using the in-pack redemption code until September 3, after which it will be available for free download on PepsiAnthems.com.  From August 13 – September 24, fans can also visit the site for a chance to win a trip to the 2013 Super Bowl - no purchase necessary.

The additional custom team anthems include:

"The synergy of music and sports has never been more prevalent, and the effect that music has on sports culture is never more present than in the NFL," said Todd Kaplan, Director, Pepsi Sports Marketing. "The Pepsi NFL Anthems program will help bring the NFL's passionate fan base closer to their teams through an authentic musical experience – whether it's listening to the anthem on your way to the game, or hearing it blast throughout the stadium after a big play."

The program is an extension of Pepsi's "Live for Now" campaign, which looks to capture the excitement of the moment and deliver experiences and content that is current in pop culture. The announcement comes on the heels of additional partnerships between PepsiCo and the NFL, including a four-year agreement to become the sponsor of the Super Bowl Halftime Show and a multi-year deal to become the official soft drink of the Pittsburgh Steelers.

"Music and football are inextricably linked and Pepsi has consistently worked with us to integrate music into our fans' experience in unique and exciting ways," said Keith Turner, NFL's senior vice president, Sponsorship & Media Sales. "The Pepsi NFL Anthems program is a testament to that tradition, and we are pleased to be working together on this groundbreaking campaign."