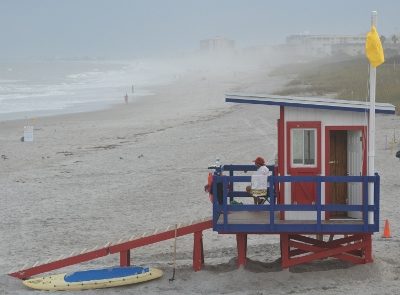 COCOA BEACH, Florida -  To boost public safety and provide better protection for its staff against the elements, Brevard County Ocean Rescue unveiled two new lifeguard towers on Wednesday, December 12, 2012.  The two new towers are set up at the Cocoa Beach Pier and at Shepherd’s Park.

“Cocoa Beach is one of the busiest stretches of coastline that we protect,” said Scabarozi.  “We want our guests to swim near lifeguards and with these new towers, it is much easier to locate lifeguards on the crowded beach.  Visibility for our lifeguards has also been improved.  It’s truly a win-win.”

Materials for the towers were purchased by Ocean Rescue and construction was completed at at no cost by workers at the Brevard County Sheriff’s Work Farm. The towers were transported from the work farm and set up at their new locations with assistance from Brevard County Road and Bridge.

Two more towers are under construction and have an aticipated completion date of Spring 2013.  The new towers will be positioned at Lori Wilson Park and at the end of Minuteman Causeway.
Labels: Cocoa Beach Lifeguard Ocean Surf & Fishing Report