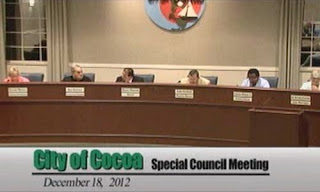 COCOA, Florida --  The City of Cocoa Council voted 4 to 1 in a Special Meeting to repeal in its entirety, Public Decency Ordinance 23-2012, more commonly known as the Cocoa Saggy Pants Law.

"While I think this style is ridiculous, I believe too that it is is a fad, and will fade away in time," said Cocoa Deputy Mayor Tyler Furbish.

The City Council also voted that no enforcement of the ordinance will take place pending the second reading of the ordinance.  The Saggy Pants law becomes effective January 1, 2012