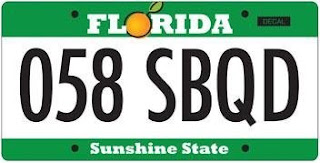 TALLAHASSEE, Fla. – After three weeks of online voting for the new Florida license plate, the Florida Department of Highway Safety and Motor Vehicles announced that the design with the solid green bars and the artistic orange forming the ‘O” in the word Florida was the most popular.


The online poll represents one part of the process to select the new plate design.  Before the design is manufactured, the public’s vote will be factored in with input from Florida Governor Rick Scott, his Cabinet and policy makers.


The Florida Department of Highway Safety and Motor Vehicles says it "needs to upgrade the basic Florida plate to a design that increases readability and features a seven-character configuration."  In other words, so that the license plate can be read better by automated means such as red light and toll booth cameras.


The FTC said in a Task Force Report that the DHSMV cited "no savings tied directly with the switch to a private central issuance of on-line and mail-in renewals while introducing an  additional layer of bureaucracy."

"This step is backwards that does not help citizens, the state, or  the other interested parties involved in license plate issuance," the Task Force concluded. "Central issuance is not a good way  to deal with increased volumes of license plates, redesigned or not."