WASHINGTON, D.C. -- Many apocalyptic predictions call for an apocalypse to occur in 2012.  The most specific doomsday countdown clock is predicted for the date of December 21, 2012 based on the Mayan calendar.  Other 12/21/2012 apocalyptic predictions are derived from Biblical, astrological, mythological or Nostradamus interpretations.


End of The World 2012: Monitor Disasters In Real Time

According to the most recent reports by the U.S. Center for Disease Control and the World Heath Organization, reports of influenza activity increased in North America, but remained at low to moderate levels ahead of the so-called Mayan calendar apocalyptic doomsday of December 21, 2012. 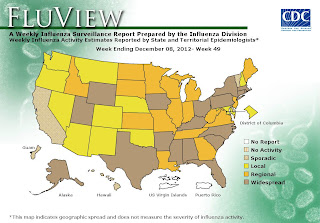 During week 49, the following influenza activity was reported: 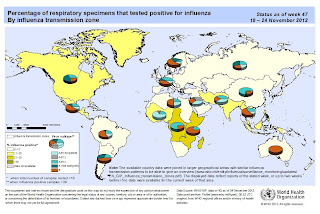 During weeks 46 and 47, influenza activity increased in the northern hemisphere while remaining sporadic in the southern hemisphere. Globally, A(H3N2) viruses remains the predominant circulating subtype followed by influenza B and A(H1N1)pdm09 viruses.

Influenza activity continued to increase throughout the United States of America most notably in the southern region with A(H3N2) viruses predominant. In Canada, influenza A(H3N2) activity increased slightly. In contrast, activity in Europe has remained low with sporadic detections of A(H1N1)pdm09, A(H3N2) and influenza B viruses reported.

In Africa, influenza viruses continued to circulate in east and west Africa at lower levels while increasing in Algeria, in the north.

SOURCE and Infographic Credit: CDC and WHO