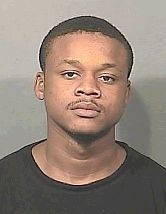 TITUSVILLE, Florida –  Titusville Detectives have obtained an attempted murder arrest warrant for 19-year-old Brandon Rashad Jones regarding the Christmas Eve double shooting that seriously injured a Titusville man.
Police say that Jones should be considered armed and dangerous.  He is described as a black male, 5'2" tall, and weighs 145 lbs.  His last known address is on Prairie Lane in Titusville, Florida.

Titusville police say that at approximately 1:25 p.m. on December 24, 2012, two victims were shot by a single assailant on Rockpit Road near Collins Avenue in Titusville, Florida.  One victim was flown to a trauma unit with serious, but not life-threatening, injuries.  The other victim was brought to the hospital by private vehicle.

The preliminary police investigation reveals that Jones approached an adult male victim on Rockpit Road.  The suspect fired at least one shot at the intended victim.  While the victim ran away, the suspect fired at least one more shot.  The second victim, a 15-year-old Titusville resident, was struck but not seriously injured.  Two women who were nearby reported being hit with possible debris from the shooting - but were not injured.

Investigators suspect that the shooting was the result of an earlier feud between Jones and one intended victim. Police believe the second victim struck was likely an unintended victim.  Neither injuries appear life-threatening at this time.  The weapon used is suspected to be a shotgun.

Anyone with information in this case is urged to contact Titusville Police and can be eligible for a reward of up to $5000.00 and remain anonymous by contacting CRIMELINE directly at 800-423-TIPS.