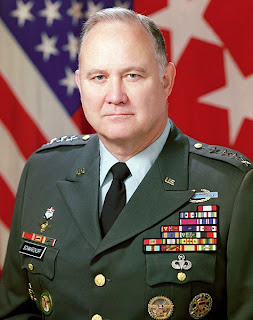 
"The men and women of the Department of Defense join me in mourning the loss of General Norman Schwarzkopf, whose 35 years of service in uniform left an indelible imprint on the United States military and on the country.  The son of a decorated Army officer, General Schwarzkopf followed his father's legacy of service by enrolling in West Point in the 1950s.   His bravery during two tours in Vietnam earned him three silver stars, and set him on the path lead our troops into battle in Grenada, and then to take charge of the overall allied effort in the first Gulf War as Commander of United States Central Command.  General Schwarzkopf's skilled leadership of that campaign liberated the Kuwaiti people and produced a decisive victory for the allied coalition.  In the aftermath of that war, General Schwarzkopf was justly recognized as a brilliant strategist and inspiring leader.  Today, we recall that enduring legacy and remember him as one of the great military giants of the 20th century.  My thoughts and prayers are with the Schwarzkopf family in this time of sadness and grief."

Schwarzkopf's command during Gulf War I marked a historic first in U.S. foreign military intervention following the end of the Cold War between the U.S. and former U.S.S.R.  The historic military campaign marked the beginning of then U.S. President George H.W. Bush's 'New World Order'  with the U.S. as the lone world superpower.  It also marked the beginning of over two decades of U.S. post-cold war ground troop military campaigns and occupation in the Middle East.

Gulf War I and Bush's 'New World Order' also marked a dramatic shift in U.S. Republican party politics between what is now commonly referred to as "neo-cons" and "paleo-cons."

Gulf War I is hailed by Republican neocons as an example of successful post-cold war U.S. interventionism.  Meanwhile, paleocon Republicans often cite Lindbergh's quotes on non-interventionism in World War II along with his father's Charles August Lindbergh's warnings against the creation of the Federal Reserve.