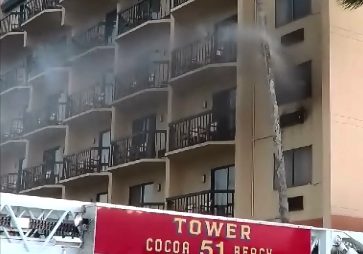 Cocoa Beach Fire Rescue crews arrived on scene and immediately started to fight the blaze while hotel guest continued to evacuate the building.  Additional fire engines and crews from nearby communities also arrived on scene to assist.

Smoke continued to billow from a window in a room located on the northwest corner on the third floor until fire crews smashed out the glass and doused the room with water from a fire hose.


The hotel had reopened in March 2012 after undergoing renovations from damage due to an unnamed hurricane-like storm, also known as the 'no name storm', which hit the hotel and Florida's Space Coast in October 2011.


The video is in high definition.  Click on the gear symbol in the video to adjust video quality suitable for your internet speed.